My weekend plan finally took shape around midnight, while I was perusing gpx tracks on the web. I had never really explored the hiking/biking trails on Mt. Lemmon. With my recent introduction to Bug Springs, I had high hopes of finding more awesomeness hidden amongst the rocks. With my typical 9 am start, the temperature at the bottom was 90 F. Armed with arm coolers and a good soaking before I left, riding the road wasn’t too bad. It was forecast to be another 10X F day in Tucson, where 5<X<9. 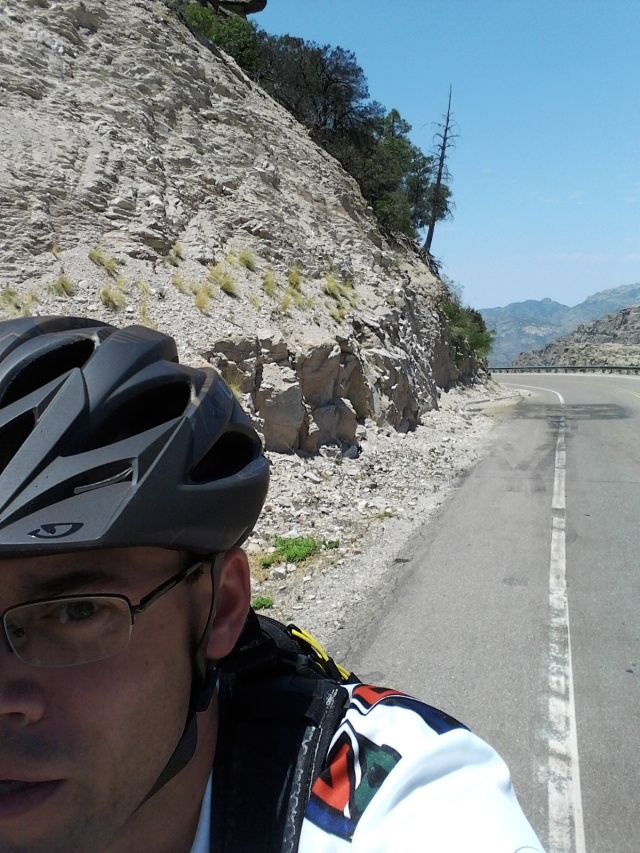 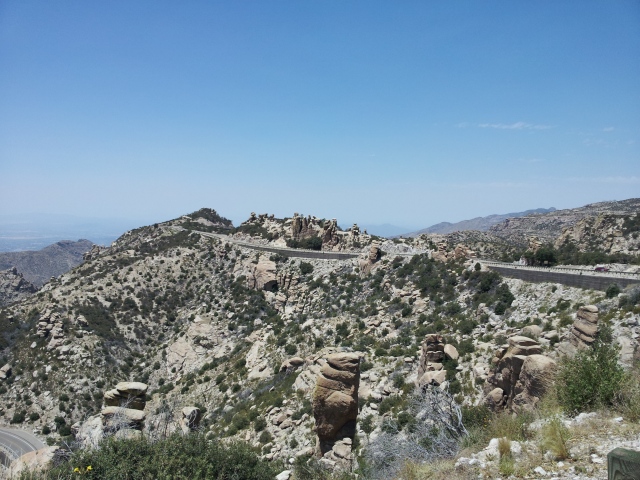 I like this section, it’s both wide-open and visually interesting.

Around Geology Vista, a guy on a mountain bike and a girl on a road bike passed me at about twice my speed of ~7 mph. Before they rode off out of ear shot, I hear the guy saying that he’s training for the Leadville 100! Yikes, that’d be some stiff competition if I were to ride it someday.

About a mile before Palisades visitor center I ran out of water. An inquiry at the forest service station there revealed that I had just ridden past the faucet at the parking lot below. While filling up, a couple guys on mountain bikes showed up and we chatted for a while. They were on their way down after having gone all the way up. They were probably in their 50s. Hope I’ll be in that great shape by then.

The short single track section up to Incinerator Ridge was technically challenging and the high altitude robbed my air. Good place to come for some practice. I cleared some places were I surprised myself. At the top, I took another snack-break and chatted with a couple who’d just hiked the Butterfly trail. They seemed disoriented, so I helped them with my GPS. The girl said: “Be careful, there are lots of trees down.” That should have a been a warning, but instead I was wondering how many trees there would be and what she meant by being careful. 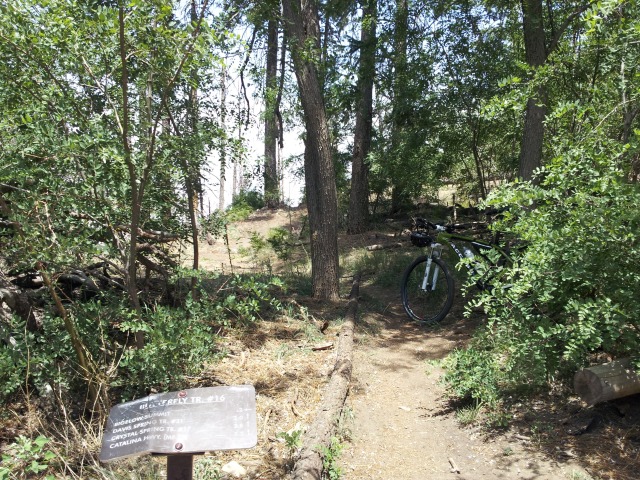 Pretty place for another snack break.

The beginning 1/4 mile of Butterfly trail was fun enough – and pretty! 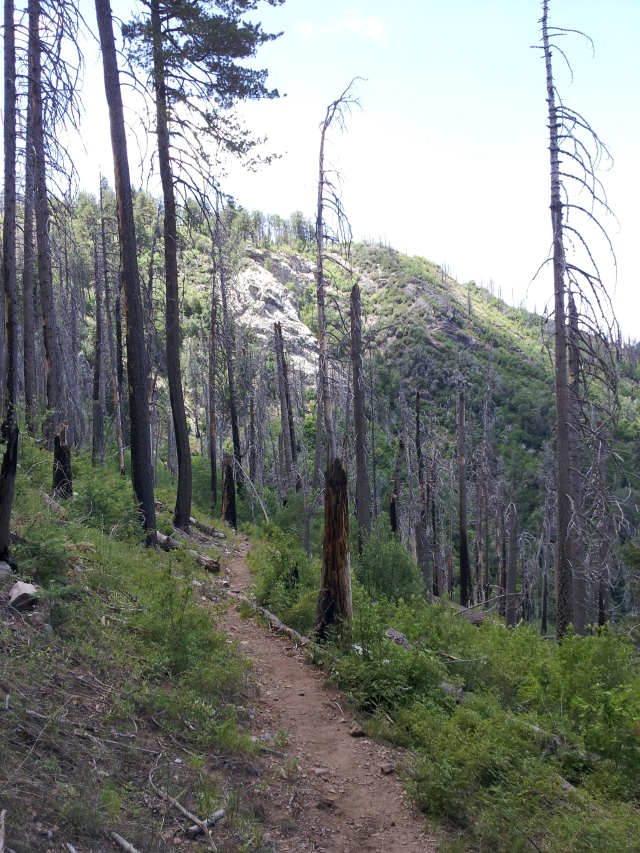 A lot of trailwork had recently been done there, but the trail isn’t really laid out for biking. After a few dismounts in rocky, exposed, steep and sandy sections (all of those combined, usually), I came upon the biggest tree I’ve ever seen up here. And, it had fallen across the trail. Time to put my new Pearl Izumi X-Alp shoes to the test! I held my bike upside down over my head and proceeded to hike around the tree. And it started to rain! Argh! I hadn’t closed my water bottle! There went about 10 oz of sticky mess right through my helmet. Besides that annoyance, I had half-emptied my water bottle. I figured I’d be fine without the extra liquid, as its only 4 miles on the Butterfly, then 4 miles on Chrystal Spring, then 3 miles up the road, should take me about 2, 3 hours.

Very few parts of the trail were rideable. Hundreds? of trees of all sizes littered the trail. By the time I reached Chrystal Spring trail, 2 hours and 3.5 miles later, I also had to deal with a blister on my big toe. These X-Alps shoes are great for hiking, but they don’t fit my feet well when riding. 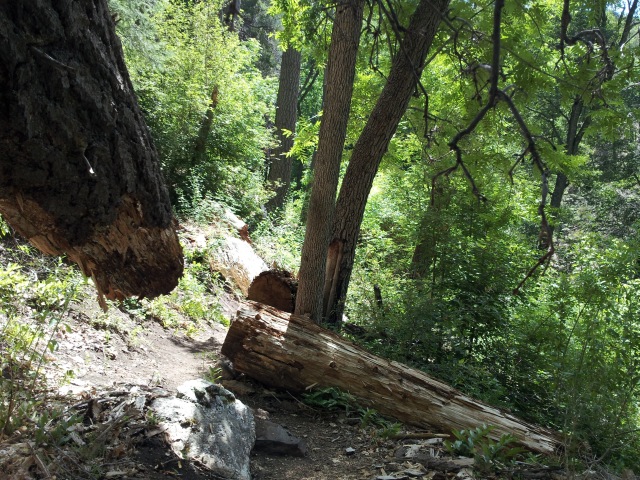 Really beautiful wilderness on Butterfly trail. This was one of the very few trees that had been cleared.

At the trail head I briefly considered the water situation in my Camelback. But, sanity did not win as the trail looked really nice! Recently, the Sonoran Desert Mountain Bike club had done trail work here, and it was 90%-ish rideable. Very cool.

Not cool, however, was that I really hadn’t enough water and half-ways in, I began to only take a sip when my throat became too dry. Once I hit the Mt. Lemmon control road that I’d went up last weekend, I treated myself to a few big gulps of water. Time to ride the last 1000 ft up and 3 miles. A couple in a big SUV asked me if it’d be OK to take this road to Oracle. After I assured them that 4-wheel drive is not required going downhill, I kept going. Only half an hour later, I was out of water and parched. I started to feel dizzy. I got off my bike and started walking slowly. The heat and water were taking it’s toll, and the altitude was probably also not helping. My goal was the Fire Dept. at end of the road, hoping that they’d have a faucet. What seemed like an hour or 2, but was only 30 minutes, I found out that they don’t have potable water. But, since I made it this far, it is only a short roll down to Summerheaven’s Community Center restroom, where there is chilled water for free. Wheew. Watched a humming bird feed on red flowers for what seemed like a solid minute. Ahh, that’s it. — Feeling better and after half an hour felt like riding more. I had downloaded GPX tracks of Sunset trail and heared about Aspen trail, so it was time to explore a little. Both trails are at the bottom of the Summerheaven road. I didn’t make it far on Sunset trail; it’s a dry river bed and tough stuff. Besides, my feet were killing me, so I rode back up, heading towards Tucson. There was a thunderstorm going on in the distance and a rainbow along with it. 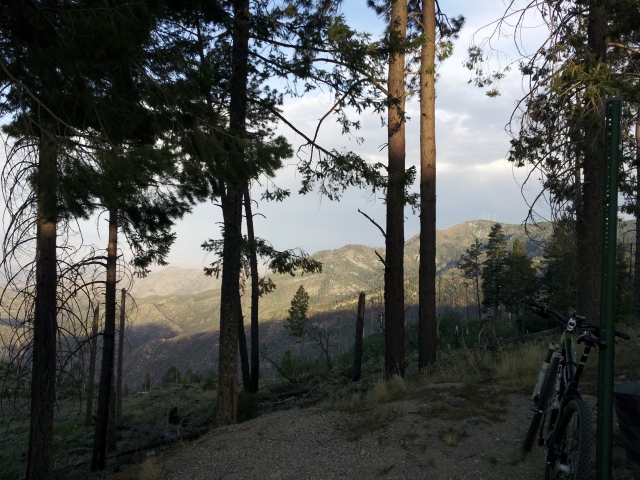 As it was just a few minutes ’til Sunset, I rested at a picnic bench until I got cold. It was getting chilly up here, unbelievable. Put my lights on and started to “roll” towards Tucson. Not much easy rolling happened; I had forgotten that there is a quite a bit of climbing left to get over Mt. Bigelow from here. 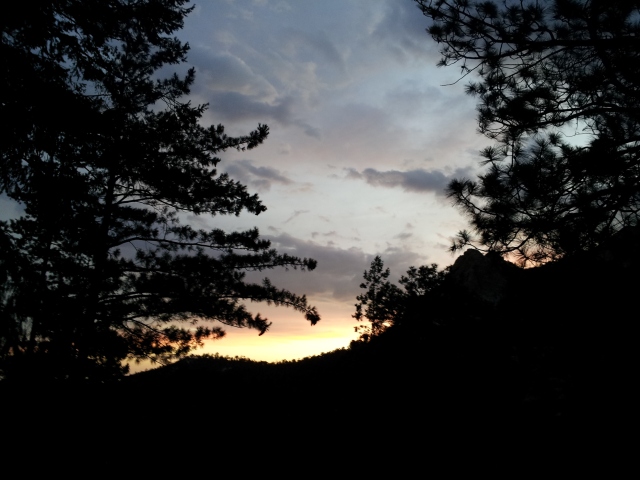 Sunset time on the Mt. Lemmon highway. It’s great to be on a bike.

It was getting dark and I was going fast. Fun night riding. The temperature steadily increased on the way down, and when I got to my car at 8:45 pm, it was 97 F. Hot and dark.  GPX track. 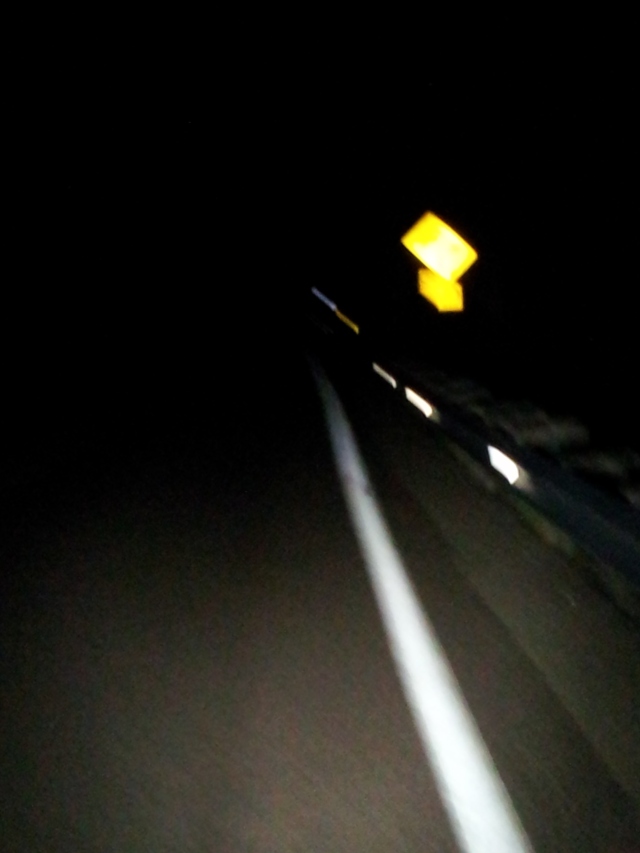 Stars above and a bright light made it easy on the way down. 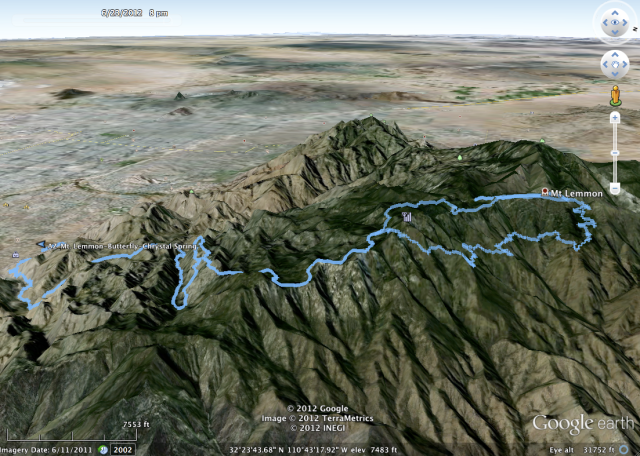