Last week, a few pictures were posted on the Washington-mtbr forum from a loop in the windswept plains west of the Columbia river. With wet weather continuing in Seattle, I was taking an interest in the dry conditions over there. After contacting the author, I got the GPX track along with a warning about the remoteness, some hike-a-bike, and the possibility of snakes. The first 2 sounded good, and I just hoped that no snake would be encountered. Trying to add a bit mileage to the 20 mile loop, I went on Google Earth and verified that an even bigger loop might be possible, and loaded that into my Garmin, as well.

It was windy, and occasionally only slow progress was made. I encountered a couple hikers from Bothell, who were also escaping the wet. Then, I saw a helmet hiding behind some rocks further up – a mountain biker was taken a snack break. Heading up higher, I wasn’t really blown off my bike until I came near the windpower generation area. At that point, I decided that this was getting too dangerous and turned around. The other mountain biker was going back where she came from: somewhere up that ridge! Scarry.

The way down to the Whiskey Dick creek went fast. Downhill and tailwind; fields of flowers flew past that I occasionally confused with trash strewn in the landscape. There was no trash, just patches of green, yellow, pink, white, and blue flowers: very pretty and unique. And speaking of trash: I spotted nothing more than 2 old shotgun shells and a couple old bottles of beer – quite a difference to the DNR-managed lands.

The hike-a-bike down at Whiskey Disk canyon worked out well with the GPX track that I had been given. Maybe a 10 minute hike/push; the fragrance of sage brush and sunshine made this a most enjoyable experience. I did a little exploring going north for a couple miles, then turned around and headed back to Vanatage, WA. On the way, I was encroached by the dark clouds seen in the images, and along with that came a steep drop in temperature. I put my jack and hat on, and bombed down the road to Vantage. A short side trip to the Ginkgo Petrified state park revealed some petrified pieces of trees from a maple, a douglas fir, and something else that I fogot. All within 100 feet of each other, all about 100 million years old, and now about 1 foot below the surface behind an iron gate.

On the drive home, there were clear views of the snowcapped peaks of the Cascade range.

Nice little canyon starts us off.

Where did all the cowboys go?

A few of the windturbines – they were churning out lots of good, clean energy that afternoon.

The wind was really blowing across this ridge. I turned around after crossing it, as my route would have taken me even higher to more windy places.

Down at Whiskey Creek canyon it was warm and the wind calm.

Looking back at Wiskey Dick canyon.

My short side trip north ended here as the clouds were looking ominous in the north.

Short snack break at the Columbia.

Where Whiskey Dick creek and the Columbia river meet.

Riding back to Vantage, WA.

View of the I-90 bridge near Vantage, WA. 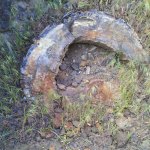 Visiting the Ginkgo Petrified forest state park. This was a maple, 100 million years ago!

Awesome views of the Cascade range on the drive back.

This entry was posted in Uncategorized and tagged mountain biking, whiskey dick creek. Bookmark the permalink.