Up Galbraith, over Chuckanut Ridge and around Blanchard Mt.

With the weather begging to come out and play this weekend, I happily obliged and planned another epic ride this Friday; this time in Bellingham. The weather looked gorgeous at 8 am, but the 60 F felt a bit chilly so I kept my windbreaker on until I came to first bit of climb on Galbraith mountain. This mountain is full of single track, double track and logging roads. I had drawn a few lines on my topomap, but didn’t quite realize that all the singletrack is pretty much ridden downhill-only. Since it was still early on Friday morning, I decided to take my chances and ride up most trails – except for one that was clearly labeled. I wouldn’t suggest doing this on a weekend. It was a lot of fun to clear the switchbacks, roots and rocks on the way up – all the while trying to keep the pace slow so that I could enjoy my 50 miler until the end.

Lookout mountain, on Galbrait. View of Bellingham to the north-west.

As I rode up the singletrack on the final leg of Galbraith, I encounter a group staging for their downhill run. “I’ve never seen anyone ride up this trail.” was the comment I got. Perhaps I am weird, but I do enjoy riding up this type of trail more than down. Perhaps, if I had a full-suspension bike things would be different. 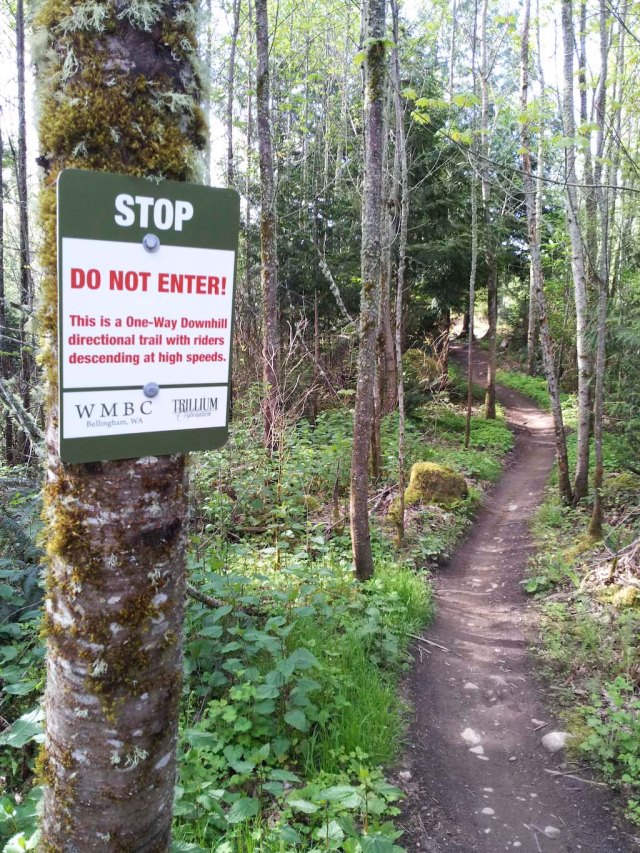 Time to pick a different route.

A little snack was had at this view point. Mt. Baker will soon be obscured by the growing trees.

Mt. Baker would my constant companion on this trip.

View of the Canadian Cascades. 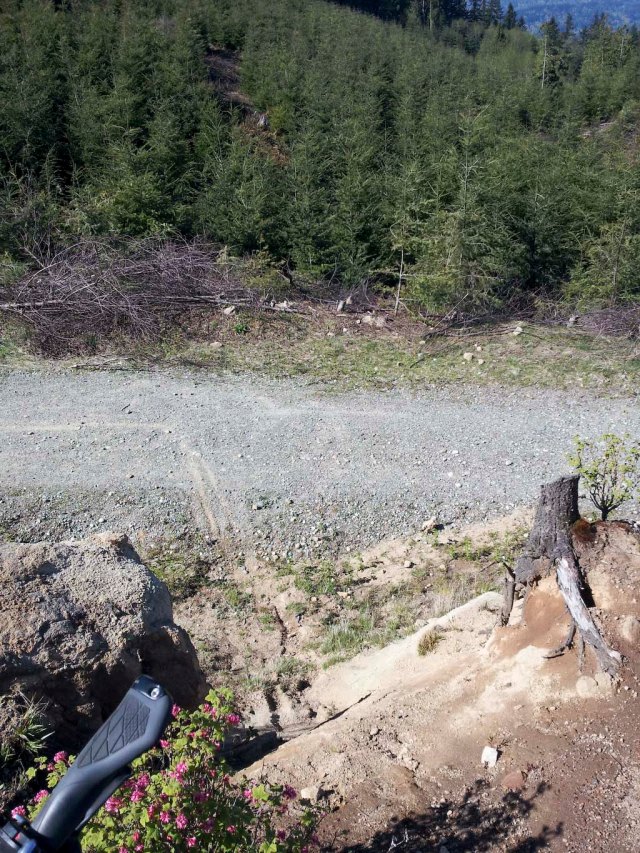 A 20 foot drop – heck, there are tire tracks all the way down!

On some portions I wasn’t sure if it was going downhill or uphill, it was just very easy and fun.

On the way down, I rode a couple of trails (Mullet and something else) with man-made features, being careful to avoid most of these. Some jumps and bridges were just good fun and balance-practice, but there were also some that would have been a serious mistake.

Didn’t ride this one on Mullet, but I’d sure like to take a picture with someone on it.

I passed on the skinnies, but did ride the boardwalk in the back.

After instant coffee and a banana I was revived, I spun up & down the hills of Lake Padden park. The trails were in fine condition and very enjoyable. Only one dab – was pretty proud of myself.

I then followed the Interurban trail to Arroya Park Reserve. What a magnificent little area! A photographer was standing near the creek with a tripod – I quickly snapped a couple pictures, too, and rode on.

On my way up Hemlock trail, I was contemplating the many trail options before me. At an intersection with a lot of trail markers, I stopped and panned the little screen on my Oregon 300 to see what trails to take next. As I am standing there, I hear a clack, clack, clack, coming closer and closer. It is an old man with a walking stick. We start to chat and this enterprising 82.5 year-old named Rex Brainard, shows me his Chuckanut Mountains map that he’s been making of the area over the last few years. He only uses his pedometer – no GPS. The map is only available at a couple places, I think, one of them being the Shell station in Alger, WA. This Friday, he was verifying a section of trail to make sure his map is up-to-date. BTW: the DNR publishes a pretty good map if that’s what one prefers. After some 20 minutes of chit-chatting – I was anxious to continue and he suggested that I head to the Raptor Ridge viewpoint if I don’t mind hiking with my bike a bit. Do I? Nope.

The hike-a-bike up to Raptor Ridge is short and fun. There are big rocks and boulders, and a sort-of-stairway made with rocks. Lovely. The viewpoint does not disappoint and I find myself a shady spot to enjoy watching a couple big birds circling the thermals in search of food. The search for my food leads me to break out my loaf of bread and water. Yummy fresh baked bread.

The trail down from Raptor Ridge is hideously nice. I can’t believe this is open to bikes – as it twists and descends through the forest. The North Lost Lake trail is next, and I decide to take the less-traveled route on the east side of Lost Lake. The trail is a overgrown and techy – but surprisingly rideable (maybe 80%). When I am not riding, the lake, sunshine and cool air make it a great little hike every now and then.

Sweet singletrack down from Raptor ridge.

My route then takes me over to Blanchard mountain via DNR roads. I explore a bit to find a second way between the Chuckanuts and Blanchard, but it ends after a 1/2 mile. The road then climbs a bit before descending again on the eastern slope of Mt. Blanchard. The view of Mt. Baker to the east makes it hard to concentrate on the downhill logging road, but I am eager to get on singletrack.

Ride, and watch the wheels turn.

Mt. Baker popping up – gotta be fast on the brakes sometimes!

First Lily Lake trail, then Samish Overlook, then Max’s Shortcut. At this point, I am running low on carbs and notice how my body doesn’t recover. Not much fatigue, if any, but no energy. A couple breaks with an energy bar keep me going, but it would be another hour before my legs would be spinning with some power, again. But, there’s not much pedaling required to ride down the British Army trail. What a blast. 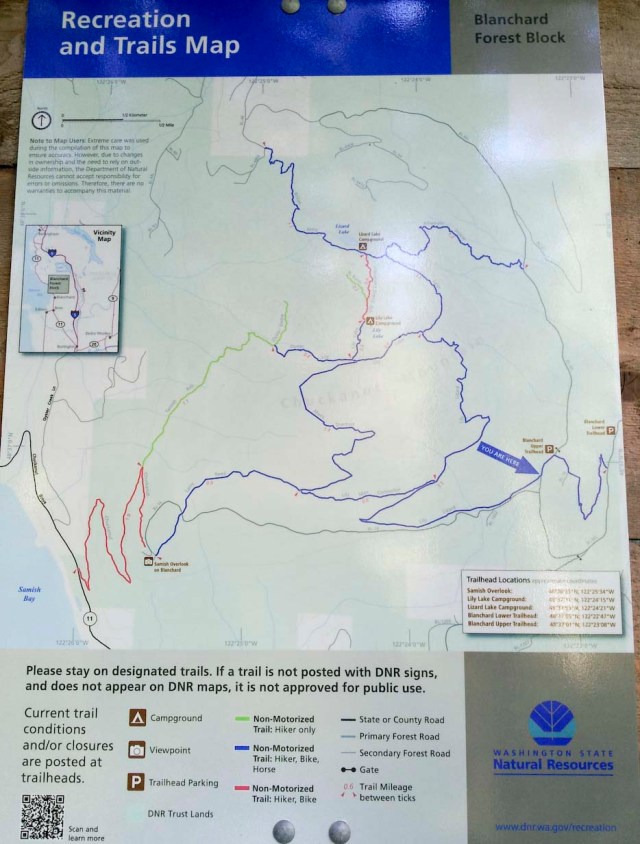 DNR trail map of Blanchard mountain forest. I took Lily Lake and Max’s shortcut, but the Lily Lake connector (top in red) was too rooty to ride.

The cable holding Blanchard mountain together. I saw this cable at quite a few places throughout the forest. I don’t think it is continuous.

On my return over the Chuckanuts, the southern portion of the North Lost Lake trail is overgrown, then becomes super-steep and loose uphill to a clearcut, where the trail pretty much ends. The gpx track that I had downloaded from Garmin showed that someone went that way before me, so I found my way between the red flags that indicate where a trail will be build in the future. For now, there was just a disaster of trees and rocks, and then even that ended. I decided to try to head out of the thicket, up to the clearcut. It takes me 45 minutes to go 0.4 miles. Super steep, loose, trees down, ferns to hold on to as I wrangle my way up to the clearing.

Beginning of the bush-waking on the southern-western end of the North Lost Lake trail.

Not quite sunset, yet, but view from the clearing are amazing. Mt. Baker to the east, the San Juans to the west. If only I had my camping gear with me, I’d stop right here for the night – and wait for the light to change for more pictures! But, I carry on, and find the North Lost Lake trail again. Super-fast descent to Larrabee State Park for a shower and camping.

Mt. Baker atop the clearcut section

And view of the San Juans!

This entry was posted in Uncategorized and tagged blanchard, chuckanut, galbraith, mountain bike. Bookmark the permalink.

5 Responses to Up Galbraith, over Chuckanut Ridge and around Blanchard Mt.