The Evergreen mountain bike club and WTA in cooperation with the forest service were hosting the annual Helen’s Fest ride & work party this Friday – Sunday. And while trail work and riding did sound good, a solo overnight bikepacking trip sounded even better.

Day 1:
After some chatting at the Marble Mountain Sno-Park parking lot, I finally locked my car at 10:30 am and set off to follow my planned route. The beginning was an abandoned forest service road with gullies and washouts. Finally, at a missing bridge I decided that I had enough and would take the paved road to the east side of Swift reservoir. 23 miles later I was there. The views along the road were pretty nice as the road is much higher than the lake below it. But, trees cover most of the views and so I did not take any pictures. At the east side of Swift reservoir is a forest service information building with bathrooms and running water. Just across the Lewis river is the Eagle Cliffs general store with a random selection of cold beverages, snacks, ice, and 92 octane gasoline. Store hours are 9-5 M-F, 9-6 SaSun, closed on Wed, I believe. Their season is Memorial Day into rainy October / November.

The Lewis river trail was most excellent. Except for the time when my rear wheel hit a sharp rock. 30 min later I had the snakebite plugged, filled up with Stan’s, and was on my way again with slightly more air in the tire than before.

The Lower Falls at the Lewis river were beautiful – the nearby campground was full with people. About a mile after the falls, I hiked the Wright Meadow trail up north. Did a lot of hiking in the sometimes steep, deep rut from motorcycles, and then hiked over exposed roots. Some maintenance crew had come through and sawed all the fallen trees. Once I reached the top, the trail improved somewhat and became sandy. Still, no views the entire time. I’d ride up a nearby forest service road the next time. This wins the award for most boring hike-a-bike.

The Craggy Peak trail was somewhat better: occasionally the single rut was not too deep and I could pedal. Other times, I pushed with my front wheel up in the air because there was nowhere to push my bike next to me in the 3 foot deep rut. Finally, towards sunset I reached a few open places along the ridge to get a glimpse of the land around me. I had gained quite a bit of altitude since the Lewis river!

The best part of the day was the fantastic view from the ridge at the upper part of Craggy Peak trail where I camped. I had gotten trail info from Grant that there was a creek running up there- and with that in mind I had left Wright Meadows with only 2 liters. After sunset, I was beginning to think about setting up camp for the night. But, with only 1 liter left at that point, I’d have to find water first. I crossed a tiny creek and tried to get water from it, but the flow was not enough to even get a small water bottle filled up. As I was poking around this trickle of a stream, I saw Mt. Adams illuminated in the red light of dusk. What a sight! Then, I headed onwards for a bit, half expecting not to find any more water. But, not 2 minutes later I pulled up along a creek with perhaps 5 gal/min flow rate and all was dandy. Now, I just need a flat spot to pitch my tent. And there, just above the creek was such a spot, protected from the breeze and with view of Mt. Hood. A hot Mountain House dinner warmed me up and I went into my sleeping bag. I laid there listening to the noises in the forest, trying to discern if there were any animal sounds mixed in. The only odd creaking was probably a distant tree, and with that thought, I was asleep within minutes. 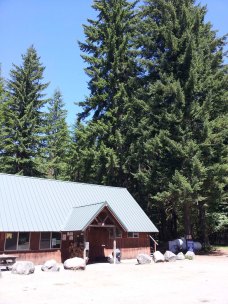 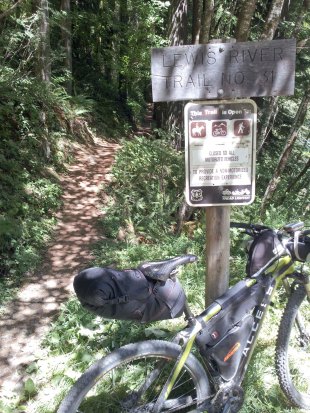 Starting on the Lewis river trail.

Along the Lewis river trail.

Trail maintenance in an old growth forest is no small feat!

Viewpoint along the Lewis river trail.

Wright Meadow trail was really boring and kind of annoying hiking. (no views) 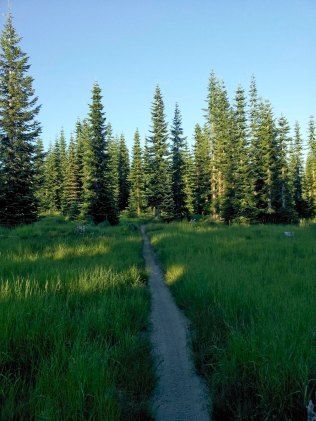 The better parts of Craggy Peak trail were quite nice.

I met a few motocross riders. This group consisted of 1 teenage girl, 1 boy under 10, and their dad!

Mt. Adams going to sleep – and so was I.

Day 2:
I awoke to the sound of a song bird. Since there was no sunshine on the tree tops yet, I decided to doze for a bit longer. When the sunshine began to stream through the trees, I got up and was rewarded with a sunrise over the foggy valleys and Mt. Hood in the distance. Wow. I made another hot meal and munched while I watched the world come to life. It was a bit cool and I started to push my bike to warm up slowly. Once over the saddle, Craggy Peak came into view – the whole area up there along the boundary trail is a really special place. Remote, beautiful, and oddly accessible. This is part of the Dark Divide area, the largest roadless area in western Washington state. The Boundary trail runs between steep rock formations and views of Mt. Rainier, Mt. Adams, and Mt. Saint Helens are frequent. The temperature today would not rise very high – maybe 70-ish, and made the hike-a-bikes quite reasonable – even chilly on the downhills in the shade. A few places of the trail were a complete disaster from motorcycles churning the ground deeply as they were climbing.

There was some sort of sticky water residue on the plants and soon my legs, handlebar and gloves were covered in this sticky substance. Badger Lake was alright – but, I didn’t stay long as bugs soon found me. The water sure looked clear. I was surprised that the Badger Ridge trail is also open to motorcycles. The trail surface looked eroded and messy.

I am not clear on what the forest service has in mind when they open trails to motorcycles. Shouldn’t there be a management plan in effect to mitigate the erosion by building a tread surface that withstands the rigors of 650’s? Shouldn’t trails be maintained by the user group? Shouldn’t trails be laid out such that erosion is kept to a minimum, instead of a maximum as seems to be the case on steep backcountry trails open to motorcycles?  — Those were my thoughts as I passed along the Craggy Peak and Boundary trails.

From Badger lake, it seemed like a long way down to NF-25. Afterwards, the Boundary trail’s tread improved greatly. At a washed-out bridge I filled up with water. I crossed NF-99 again and was then on primo single track – leaving the noisy world of street-motorcyle gangs on NF-99 behind.

The Boundary trail towards Ghost Lake is very nice singletrack – grade and surface were good. Climbing over a couple big trees added to the fun and wilderness feel. The area is very beautiful with expansive views of the trees knocked over from the blast of St. Helens. The Boundary trail up to Norway Pass is open to mountain bikes; read about my adventure riding this portion of the Mount Margret backcountry one year later.

I then rode NF-99 up to Smith Creek and took the trail down. Wheew: steep and loose. Not much fun riding the beginning when you loose all the elevation. Once that has happened though, the trail was simply delightful, crossing the Smith Creek a couple of times where I soaked my sore, hot feet. Lava Canyon trail is closed to bikes past about 1 mile up, then a bridge brings one over to the other side, and the trail goes back down to meet the existing gravel road to the Lava Canyon parking lot. The dirt road ride back up was seemingly endless, I was ready to be done with it. Note to self: Next time, take the new trail that branches off about 1/2 mile before coming to the Lava Canyon trail.

This was my first bikepacking trip in Washington state – and a pretty darn good one overall!

An airplane was lit up from below by the rising sun.

Almost the view from my tent.

Stepped a bit out of the trees from my tent and enjoyed breakfast. 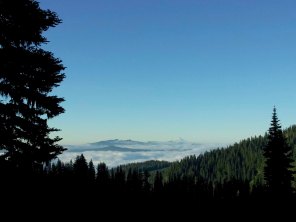 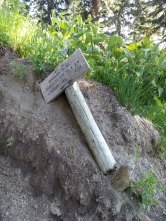 The better parts of the Boundary trail were alright. 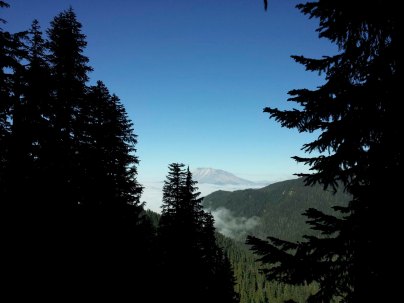 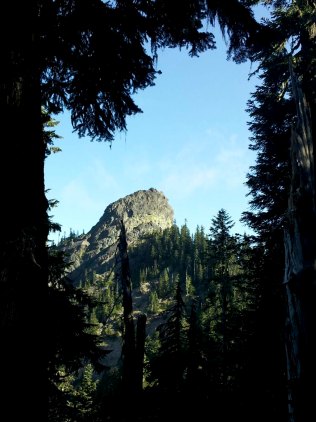 One of the worse parts of the Boundary trail. 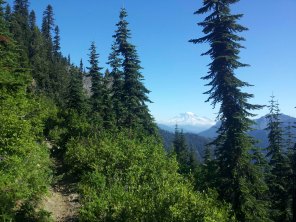 Mt. Rainer on my way around Shark Rock. 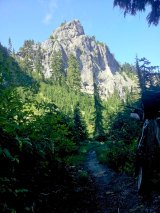 Heading down towards Badger Lake.

The Boundary trail becomes much less used west of NF-25 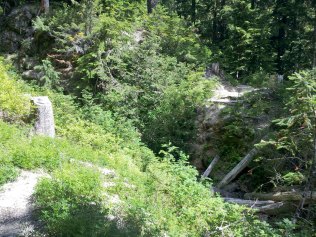 All remains of motorcycle tracks stop at this washed out bridge. Not enough to stop me from my adventure.

Hikers and bikers only – and what a lovely hiking trail the #1 has become inside the National Monument.

All the trees had been knocked over in the same direction by the blast.

A missing footbridge that was actually harder to cross than it looks. 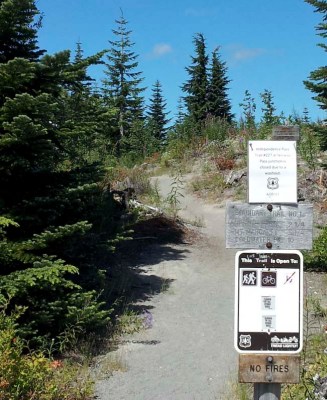 The Boundary trail is open for bikes up to Norway Pass. Perhaps some other time I’ll get to explore this area.

For now, my plan was to ride up to Windy ridge. The paved road is a bit oddly maintained.

Smith Creek trailhead – I didn’t make it up to Windy Ridge and instead headed down here.

And a steep beginning had me walking. 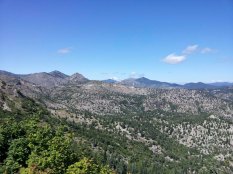 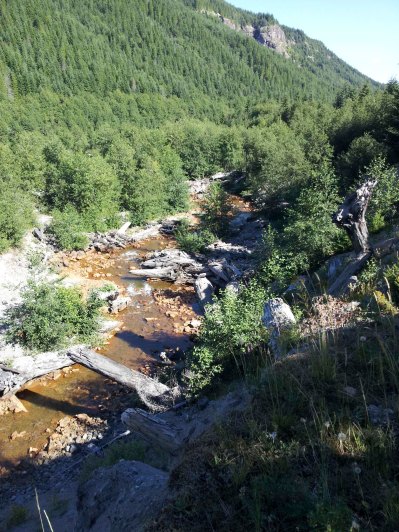 The tiniest (and steepest) ridge line along Smith Creek trail.

And then going Lave Canyon trail back down because the bridge had been washed out.