As luck would have it, the weather forecast of sunshine for east of Ellensburg wasn’t quiet accurate, instead the entire ride was at ~28F in freezing fog. I am not sure if freezing fog really exists, but that’s what it felt like. During my previous exploration of the Whiskey Dick wildlife area, I had wanted to explore a bit farther north, but my lack of maps of the area left me stranded. Having come across the excellent Caltopo mapping site, I made a gps track right over their available satellite and topo maps, and added that to last time’s route. The extension track turned out to work well, there was only one section that was closed, and  was easily re-routed.  The route consists of a lot of riding up and down drainages: sometimes contouring elevation lines, other times not so much. But nothing too terribly steep and long, and since its so quiet out there, it’s very relaxing. 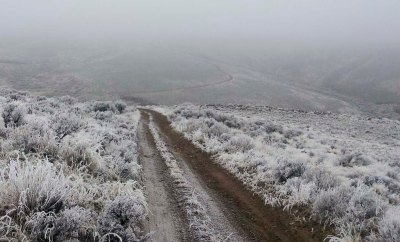 Today’s motto: down frosty dirt roads, and then back up on the other side.

Compared to early spring, the landscape was not nearly as colorful, but the thousand shades of grey mixed with hues of purple and brown also looked beautiful in their own way. I also saw one herd of about 12 deer or elk. Farther along, I came to this overlook of the Skookumchuck creek; I was surprised by the depth of the canyon that it has carved.

Overlooking the valley of the Skookumchuck creek.

A nice little ride before winter is about to drop a few bags of snow in the mountains during this coming week. 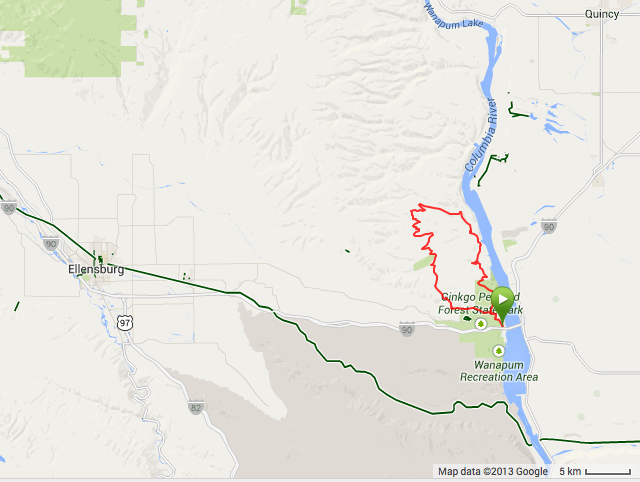