Vantage, WA, is the place to be during many rainy weekends in Seattle. I’ve ridden the Whiskey Dick area 3 times now, and while some variations are possible, the loop is only about 30 miles and 5000 ft. of climbing – not quite long enough to justify driving 5 hours round-trip. How about a double loop, I thought? Riding trails the other way usually makes it feel different – and so a plan was born for a big ride.

View from Whiskey Dick towards the Ancient Lakes area.

Quite a few of explosions could be heard from the Yakima Firing Center over 10 miles away, and some gun shots that were closer. Half-ways done with my first loop, I heard some shots coming from a canyon I had planned to ride up. Instead, I turned around and rode & hiked down the trail along the Whiskey Dick river. I hadn’t been there in a while and enjoyed it just as much as I did the first time a year ago. It’s such a pretty canyon.

Along the Whiskey Dick creek.

After a few switchback climbs into my second loop, I saw a camouflage ATV & rider approaching quickly. Strangely, he stopped a switchback beneath where I was and took a break or something. I kept going as quickly as I could and turned my cell phone on to check if I have signal in case this guy turns out to be a nutcase. Ok, cell signal is strong. I hear some gun shots in the distance – dang, the guy must be target shooting in the middle of nowhere? After 20 min. he quickly catches up with me and I snap a photo in case this turns into a bad encounter.

The guy slows down and turns the engine off. The badge on his arm reads Department of Fish and Wildlife. Ok, I guess I’ll be fine. He inquires about my riding plans “You are covering quite a bit of ground. Have you been here before?” and if I have lights for the way back. As we are talking, some people are unloading some sort of automatic weapon in the distance. We chat a bit more, then he turns on the engine on the ATV and speeds off in a matter of seconds.

I am alone again – just the prairie, dirt roads and a herd of deer crossing the trail. The golden hour starts.

The slight breeze completely stops as it gets dark. It even seems to warm up and I have one big climb left – which I mostly walk. Afterwards, it’s one long and bumpy descent back to the car. Driving back, not 5 miles east of Vantage it is pouring down all the way back to Seattle. 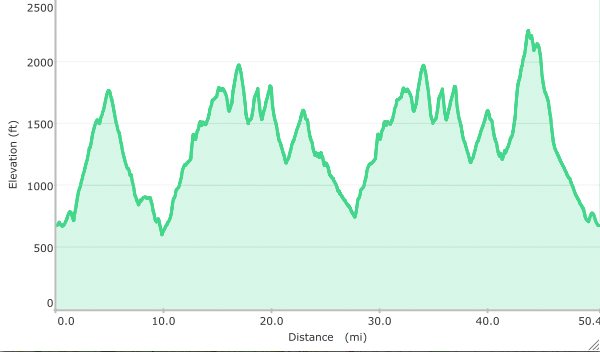