Bikepacking stories are coming from Arizona since a couple months and are getting me eager to get out. A post on bikepacking.net about routes in WA mentioned the Naches Pass Trail to be a must-do for historic reasons. A quick google search reveals that this trail / road indeed is steeped in history – though the reports of a hiker about gargantuan trail damage from jeepers had me wondering a bit. I checked the nearest Snotel site (Sawmill Ridge at 4500 ft.) and it was clear as of last night, just in time!

I fixed some issues on my bike last night (rear brake, chain, and my Stan’s freehub was dragging badly), and then threw the bikepacking gear together and drove to Greenwater, WA. From there, I took NF-70 to the Naches trail. The beginning of the trail (which was almost the end for the settlers) was closed to bikes due to its steepness. 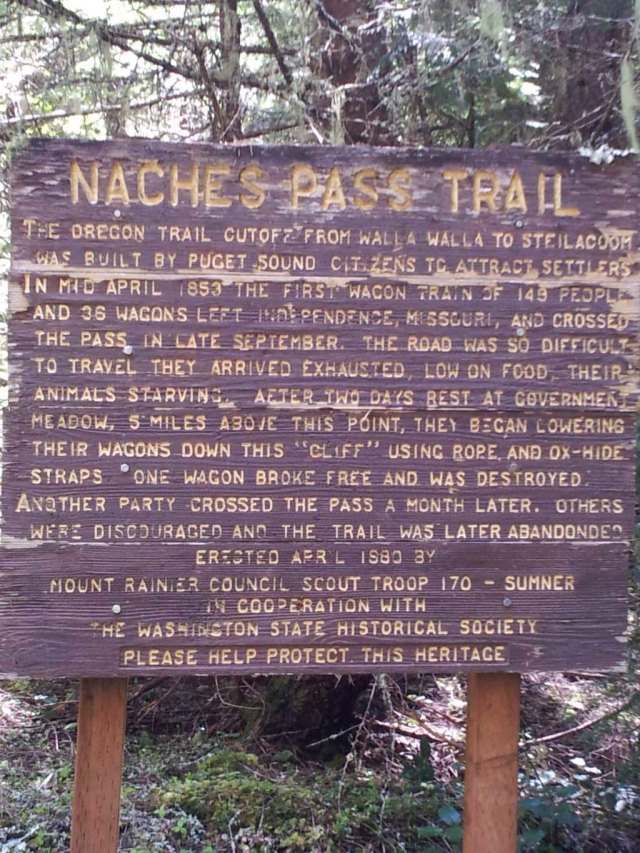 The trail actually goes over a cliff where settler’s wagons were lowered by cowhide over a cliff! I made good use of the inclined plane (NF-70) and skipped that HAB section. From the top, I could image where the wagons had been lowered 150 years ago – and supposedly the marks from the rawhide ropes can still be seen in the trees. I found a place that may have been it, enough to fill my imagination. 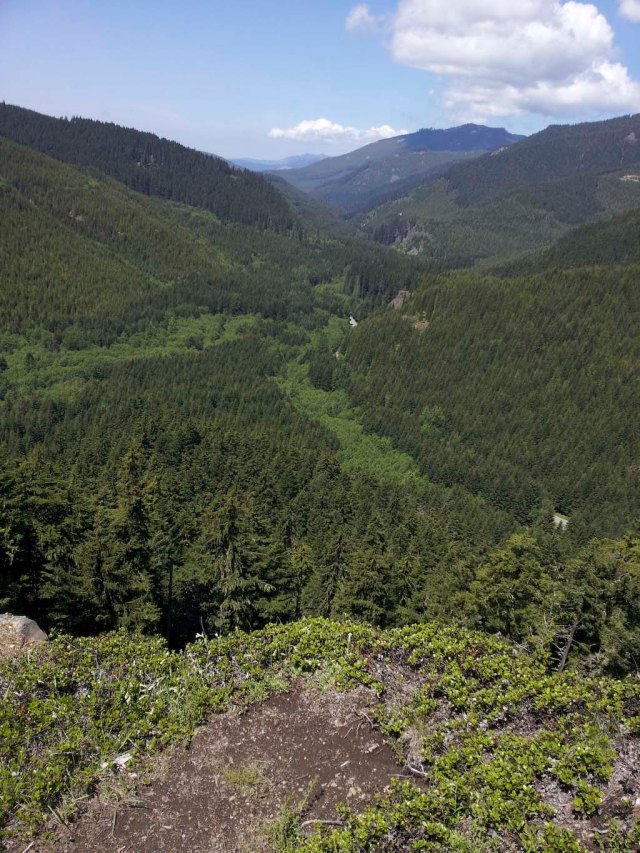 Looking down where possibly the settlers wagons were lowered. 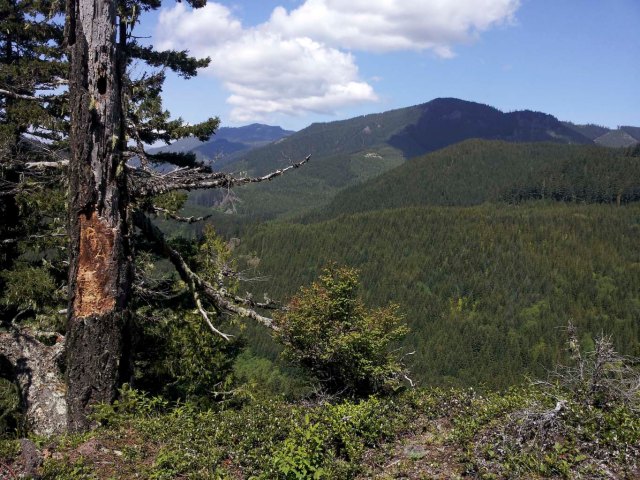 Tree with possible marks left behind by settler’s ropes (and modern day vandals).

Then, the disaster of a Naches Pass Trail started. Steep, deep ruts, muddy. I’ve had worse, though – jeeps do leave a much wider “rut” behind than motorcycles, so even though the walls on either side were 8 foot high, it was pretty easy to push up. 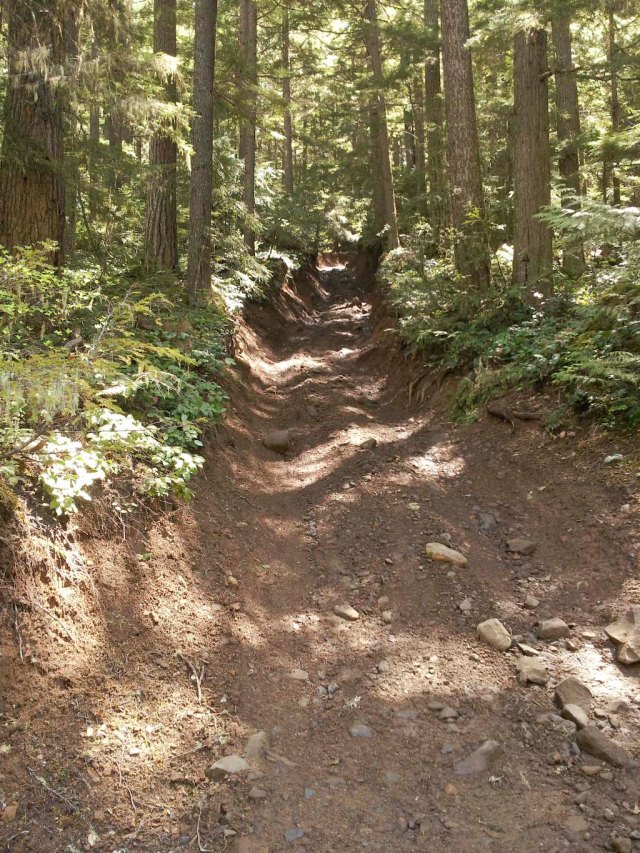 Again, very steep, but this time, the smell of transmission fluid permeated the air.

When Naches Pass trail wasn’t steep, it was muddy.

I encountered a couple motorcycles coming down and said they turned around at snow. Dang it, snow? And wait a minute: isn’t this trail closed to motorized use until mid-summer? I continued upwards: at times the trail had became a creek bed, other times it was fun, rideable. Higher up, the terrain changed, more rocks and less moss. 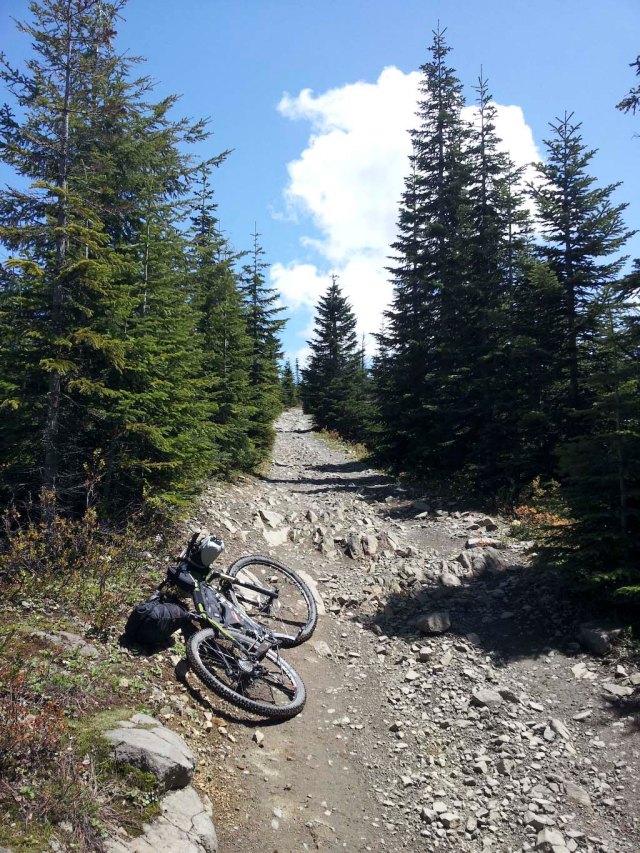 A couple detours did not reveal an easy (snow free) way over Naches Pass, so I went back down on the fast gravel road.

Will I be back? Maybe in 3 weeks when the snow has cleared. The biggest downer was the amount of shooting going on near NF-70. Along the entire 10-15 miles of road are people stationed near their pick-up trucks just shooting like WW3 broke out. Gun shells littering the ground. Not relaxing.

This entry was posted in Uncategorized and tagged Naches Pass Trail. Bookmark the permalink.