This Saturday was the second ride of the Washington Endurance Series. 4 people had signed up, but only 2 made it to the starting location – same as on the last WES ride. We later met the other 2 riders along the Jolly Creek trail. They had started earlier from a different location, but had been deterred by the fallen trees along the Middle Fork trail and were hiking back up Jolly Creek trail (which is super tough!). I thanked them for coming out and felt bad for them; but everyone has to make their own decisions to keep themselves safe.

We rode the course as it was posted and had a great time. We met a lot of motorcycles, chatted a lot, didn’t ride particularly fast nor steady, and took a lot of pictures. We finished the 40 miles and 9000 ft. el. gain in 11:17 hours. This is one of my favorite rides. I think the variety of trails and gravel on this loop works great.

The ride started out with a dirt road climb that lead onto the Sasse Mountain trail. From there, it went up to Jolly Mountain (6460 ft.) where we spied Mt. Adams and Mt. Baker, besides the omnipresent Mt. Rainier. I’ll let the pictures and captions speak for themselves for the most part. 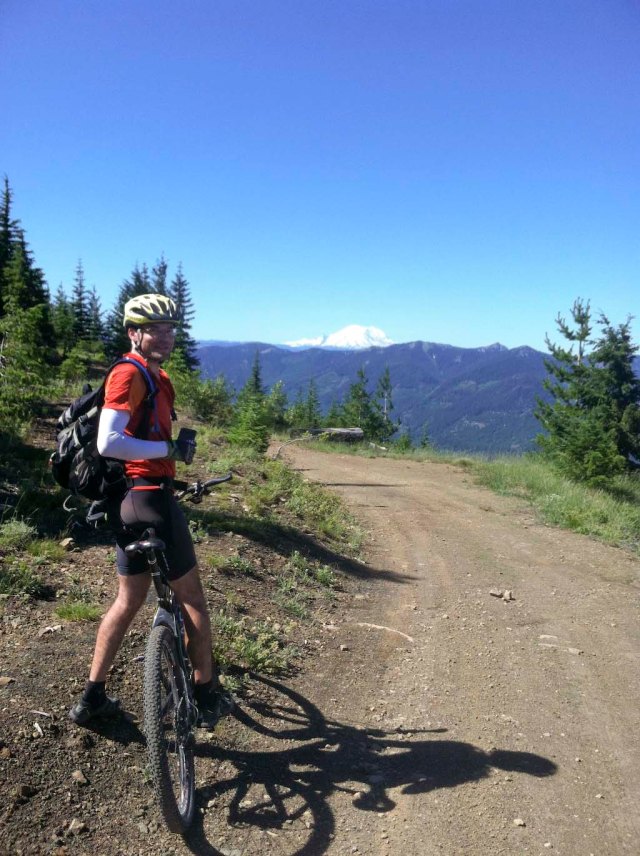 Mt. Rainer was popping up all the time. This, and other pictures with the name “_Eric” are by Eric Kamila. 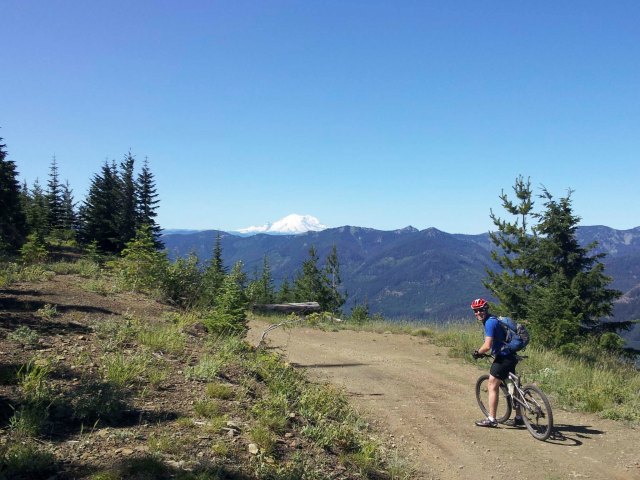 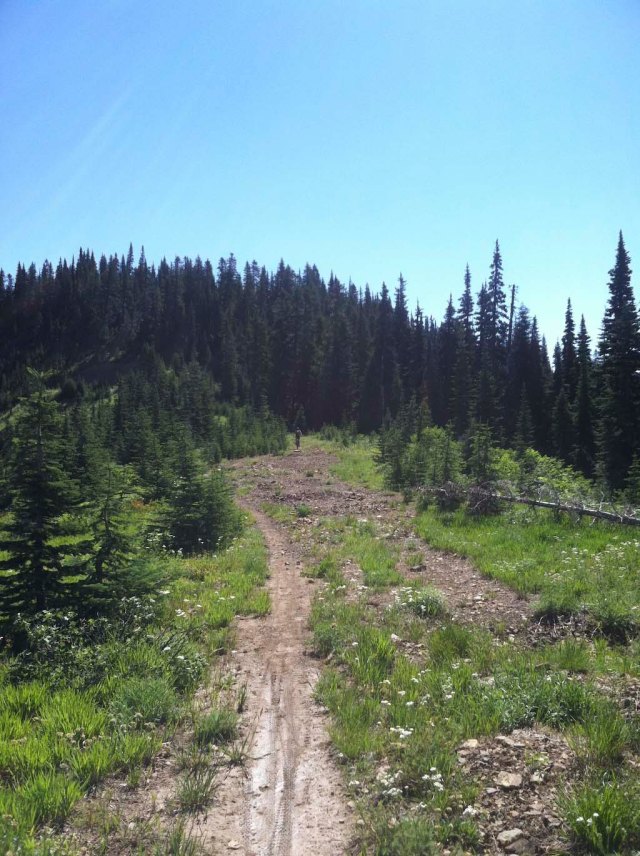 Onwards on the Sasse Mountain trail.

Upwards on Jolly Mountain trail. We had to push occasionally, but rode a lot. In my case, I paid for it later pretty hard, but it was so much fun getting over the technical terrain. 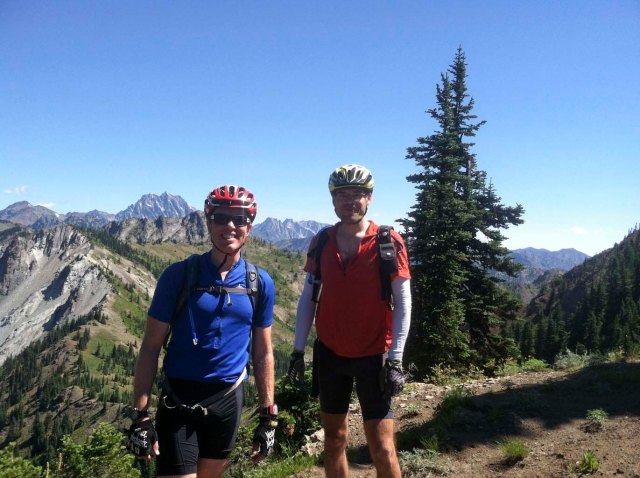 Chatted with a couple guys on dirtbikes for a while, and then they even took our picture! 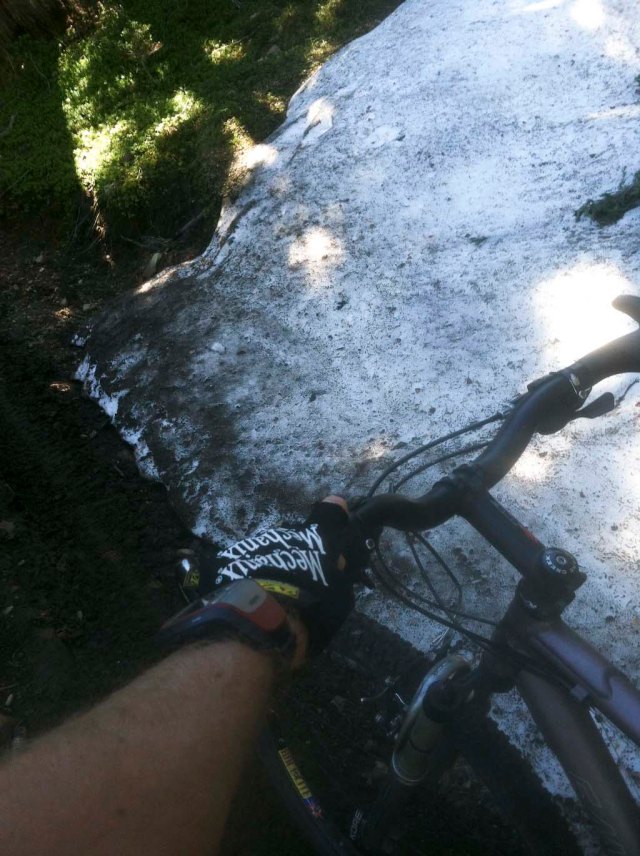 One tiny patch of snow left on the last bit up Jolly Mountain.

Eric found a fossilized rock – which he carried in his backpack the rest of the trip! 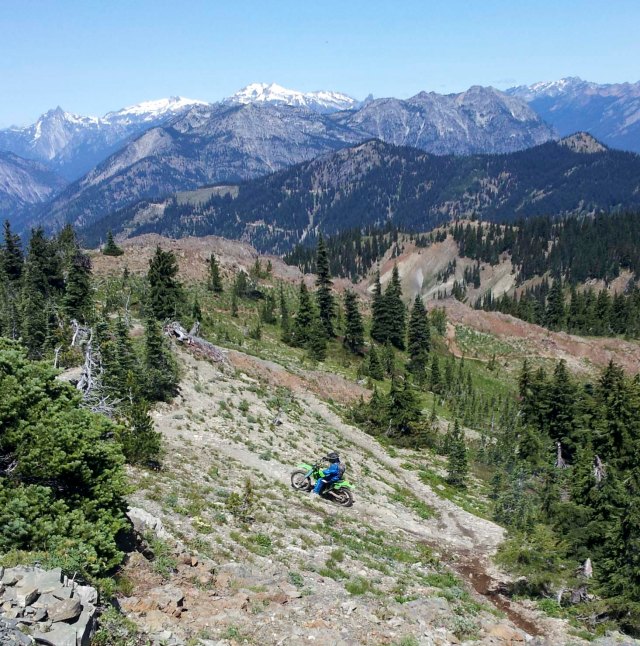 The dirtbikers were slow, here one of them is finally catching up with us near the top.

Reached the top of Jolly: 6460 ft. Lunch break amongst many biting flies made the 20 minutes go fast.

Down from Jolly Moutain.

The lower portion of Jolly Creek trail and the 1st mile up on the Middle Fork trail had quite a bit of downfall that hadn’t been cleared. We later learned that there is a fire ban in effect so that chain saws are not allowed. I counted 19 trees down on the Middle Fork within the 1st mile, then it was clear again. 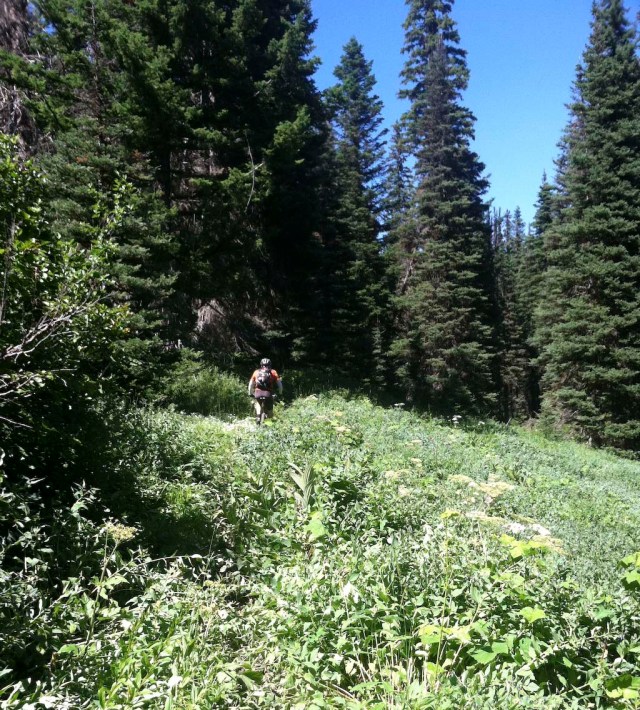 Up and over the ridge on the De Roux Spur trail.

Then up the Esmeralda Basin trail. 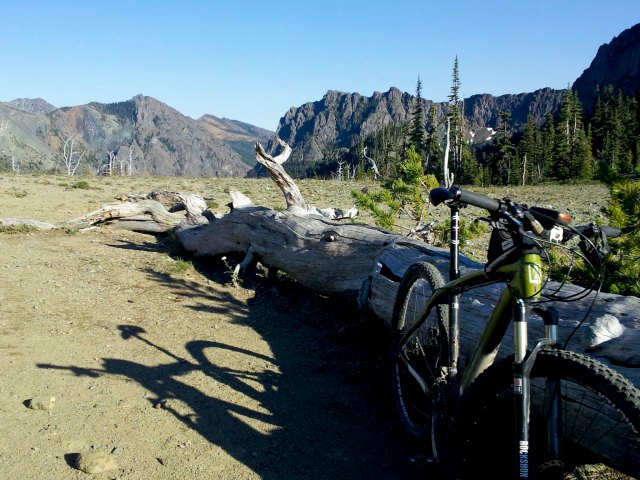 At the Esmeralda ridge.

I had been getting dehydrated and felt totally out of energy on the way up Esmeralda. Utterly drained, I lay down on the trail and waited for my stomach to start working again. I wasn’t sure if I could get down Esmeralda, it’s quite a tricky trail and it’s easy to make mistakes when you’re tired. Luckily, a shot of instant coffee revived me 10 minutes later. Whoot – time for the Esmeralda downhill. 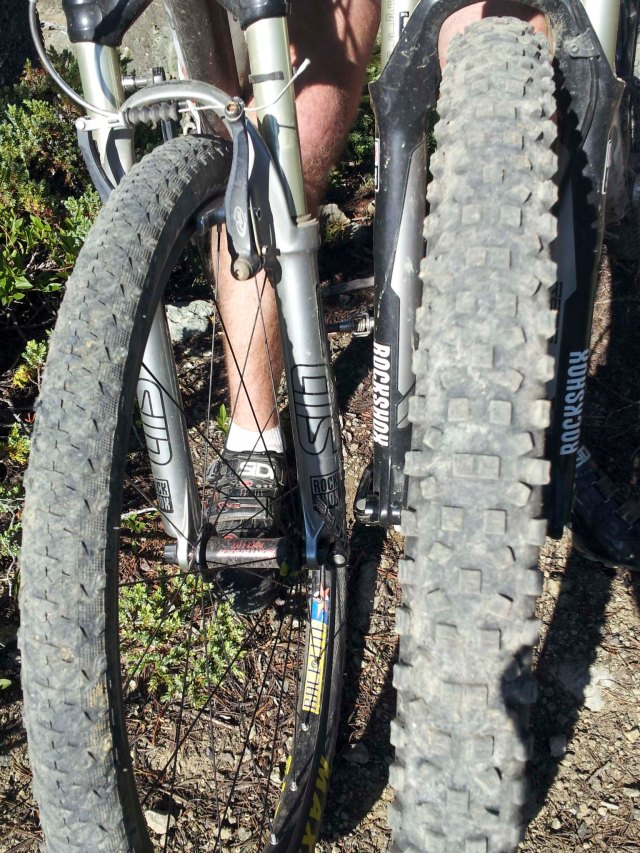 Earlier on the Middle Fork trail, Eric got a sidewall tear and had to mount his spare(!) tire. His 285g tire tire looks dainty next to my 29er Hans Dampf. But surprisingly, that tiny tire didn’t slow him down much.

The fab downhill was of course followed by the hike-a-bike up Furtune Creek road. Lots of campers with Jeeps at Gallaher Head Lake. 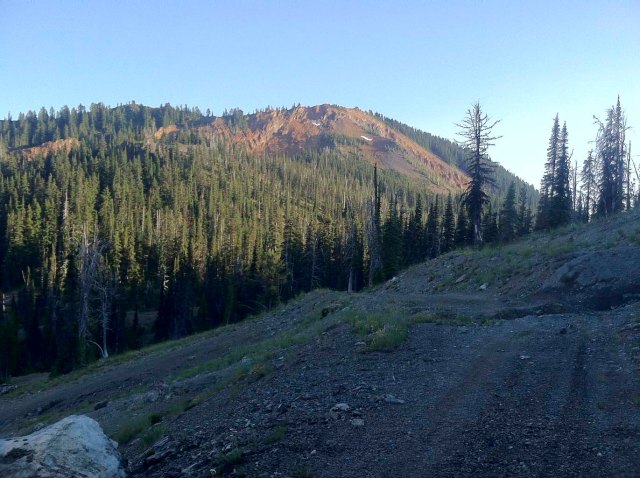 Nice evening light is lighting up the mountains. We have bike lights – so no worries.

And then 3.5 downhill miles on Boulder de Roux. Eric rode this with his tiny tire in the front – still not sure how exactly he did that. 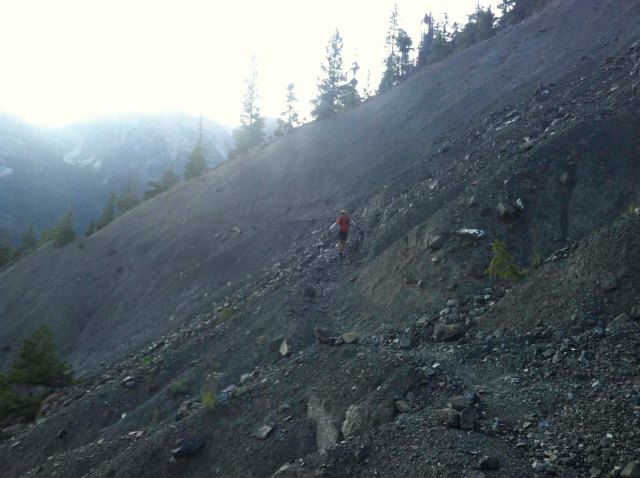 The last bit on the gravel road back to our cars went quickly. An amateur astronomer, Ram Viswanathan, had set up his gear to take advantage of the new moon. Also, Eric turned out to be an amateur astronomer. So we 3 stood around and talked shop for a while 🙂

You should check out some of the astrophotography from Ram Viswanathan and from Andy, who was setting up just as I was leaving. The universe sure looks pretty with color.

This entry was posted in Uncategorized and tagged WA endurance series. Bookmark the permalink.