My idea to welcome the New Year was with a fatbike ride to look at Mt. Rainier. The weather was cooperating (not cloudy), so I headed out at 6:10a for the 2 hour drive to the Highway 410 area. The density of cars increased the closer I got to Chrystal Mountain ski resort, but instead of following up to the resort, I parked below near the Mt. Rainier National Park entrance. About an hour after sunrise, I set the bike wheels in motion to see what would be rideable along the 410 Highway and perhaps the Sunrise Rd.

The Mt. Rainier entrance was decorated by a headless snowman.

After all the teaching preparations for the upcoming quarter, my mind was spinning faster than my wheels. Frozen waterfalls graced the rock wall along one side of the road. With time, I found a rut left behind by a wheeled vehicle to ride in, and made fairly steady progress.

I was the first person out there, but after a while I heard a snowmobile approaching from behind. It was nice to chat for a while with the avid backcountry skier, but I quickly cooled off and continued at my sluggish pace to stay warm. 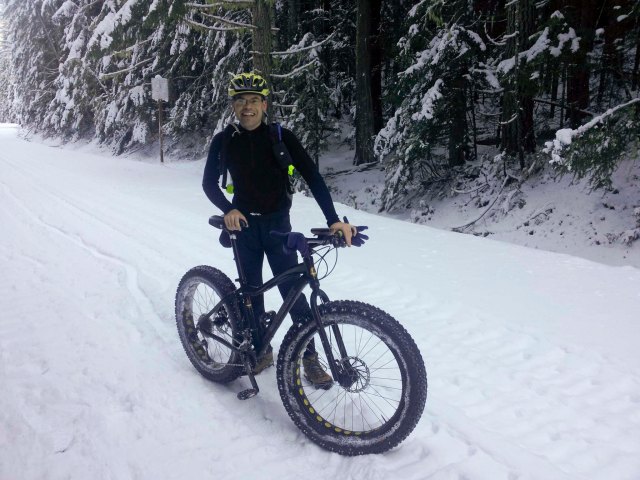 It’s quite techy to climb a 5% road covered in semi-slippery snow. The snow was a on the edge of being rideable for me. I let air out of my tires 3 times, each time gaining valuable traction. I learned some new skills that helped when the wheel started to slip and I was still getting bogged down in spite of the very low tire pressure:
1: go easier (not harder) on the pedals
2: gently shift your weight over the rear wheel
3: pedal smoother than humanly possible
4: hone your instinct of where snow is slightly more compacted
5: ride in a straight line at 3 mph in said 8″ rut for miles on-end

It was fun, despite what it may sound like. A few times I thought that I was done for and would have to turn around, but a bit of walking through a soft section and more rideable snow was found again. I surprised myself and laughed as I was riding a bike where it really didn’t seem possible at first glance.

After gaining a bit of elevation, a break in the trees made the whole trip worthwhile. It’s the early morning of Jan. 1, 2015, and I see this. Not a bad way to start the new year. 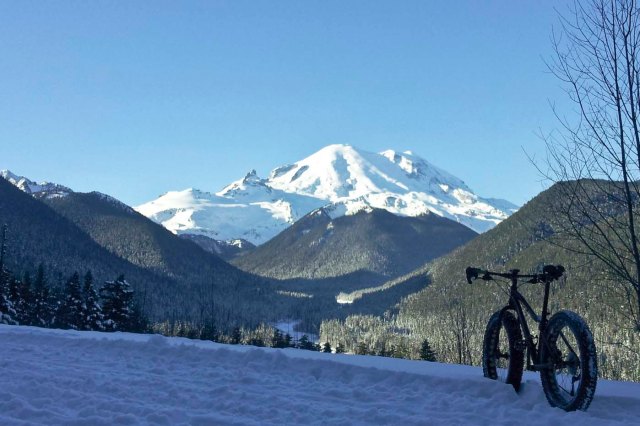 Mt. Rainer from the 410 highway up to Cayuse Pass.

A few pictures later, I was on my way again, constantly surprised that the snow, despite getting deeper, was still rideable. 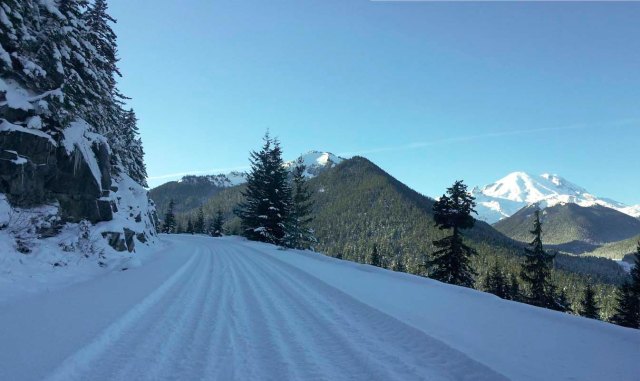 The higher I got, the warmer and sunnier it became – time to take off the thermal pants. Towards the top, it was only 50% riding. But still, riding a fatbike, up here? In winter? Conditions were as perfect as they probably ever get here. 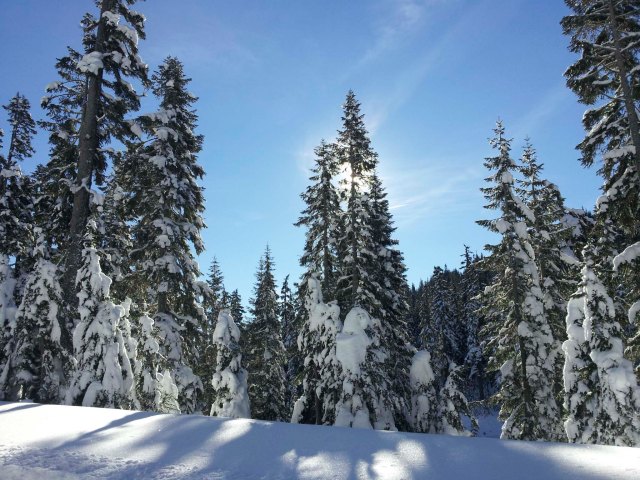 As it was getting time for me to turn around, the road started to level out and the snow was getting too fluffy and deep to ride. I had just reached Cayuse Pass. I didn’t think that I would make it here. Ah ha: there is Naches Peak! The only sound I heard was snow falling off tree branches. Amazing. 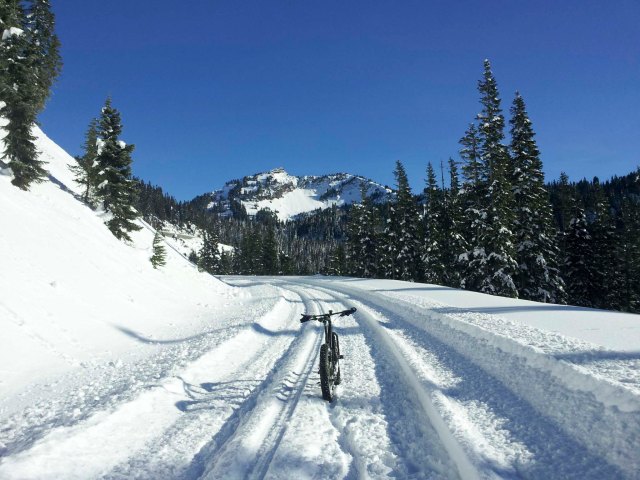 Naches Peak comes into view at the top of Cayuse Pass, just past the intersection with the snowed-in highway 123. 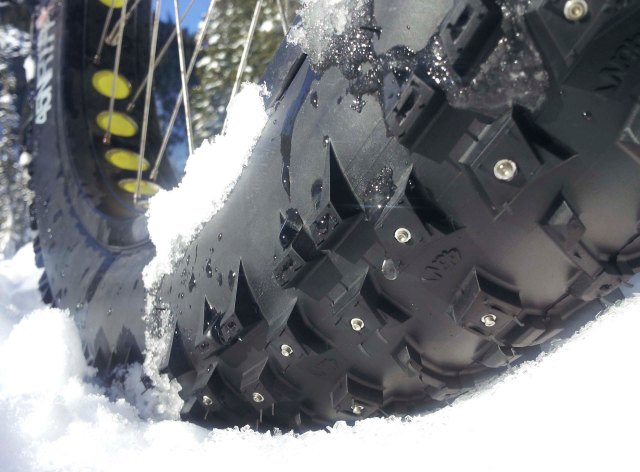 Now it was really time to turn around and see if this white stuff is any easier to ride down. And it was! I rode everything, no pushing required. I couldn’t believe my luck.

I quickly made it back to the White River/Sunrise Rd. and had to stop to chat with all the hikers/snowshoers/skiers that were heading up. “Those are the biggest tires I have ever seen.” was the exclamation from almost everyone I met.