Another fatbike/snowbike ride up to this peak – but this time in beaming sunshine.

The warm weather meant that the roads didn’t have a lot of snow in the beginning and a sign said that the road was closed to vehicles. But, oddly, the snowmobiles were gone too, so I had the entire Entiat range to myself. Oh, it was delightful. Only the occasional sound of a bird, or snow falling off trees, added to the sound my stomping.  Yes, not much riding was had on the way up as the snow was very difficult to ride on. First, it was like velcro, offering immense rolling friction, then it was 4″ of fresh powder over ice, which was even difficult to walk on at times.

But, progress was made and eventually, after 4 hours, I had covered the 10 miles to Sugarloaf Peak.

Tiny ripples frozen in the snow.

From higher up, I could see that the Fish Lake SnoPark was void of snow. No wonder there weren’t any ‘bilers out. A bit of riding here and there lead to the final push up to the peak.

No snow at Lake Wenatchee or Fish Lake. 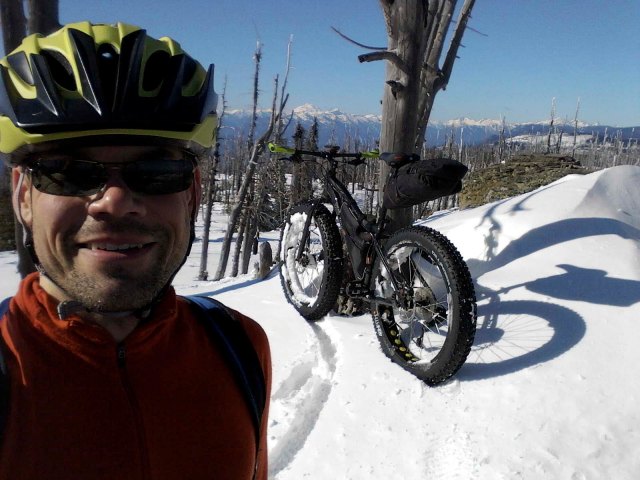 A bit of looking around, eating, and photography lead to a doze/nap on a dry wooden bench. It was cold and a bit windy, but the warm clothes that I had brought were perfect for this and I enjoyed the view for half an hour.

My view from the bench: Stormy mountain the middle (far back), and Baldy mountain to its right.

Glacier Peak in the middle.

Mount Stuart and the Enchantment Peaks to the south.

Then, it was time to go back. I wasn’t sure how much would be rideable, but tried it immediately. I took a tumble riding over a small snow cornice at the top and was lucky that my bike landed besides me, instead on top of me. Brushed off the snow and then was able to ride down all that hard-earned elevation. Much better than last time when I had to push down from the top. What a ride: plowing through deep snow and only sliding out a handful of times. Delightful. 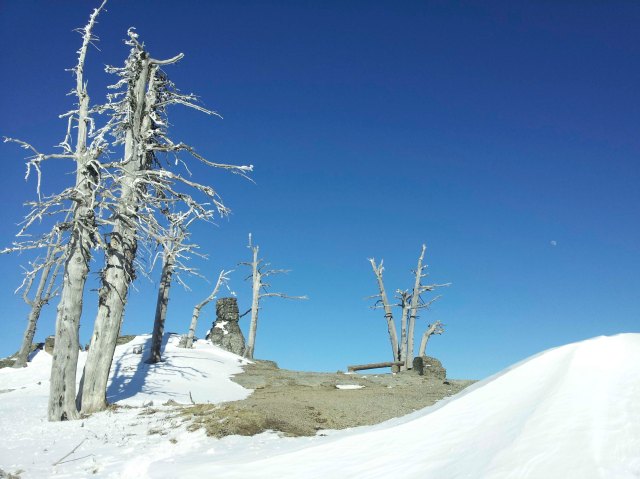 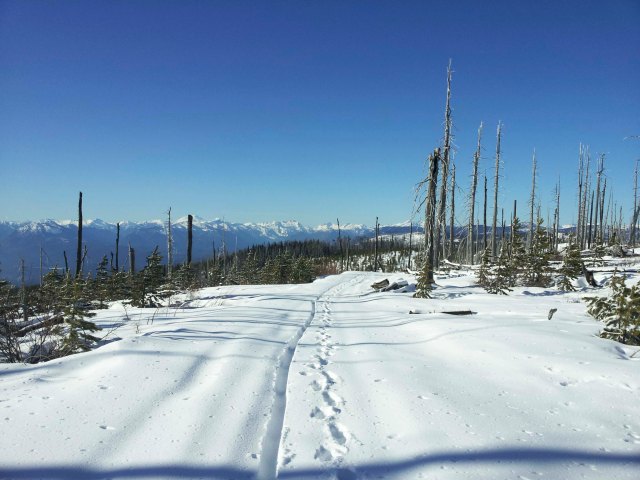 Riding down from the top… no pedaling required..

quickly lead to where I had been 2 hours before.

I mostly avoided riding in the rut that I had created on the hike up since it had gotten a little wobbly and hard. Sunshine, snow, downhill – all this brought me back to the car in 8 hours, during which I had covered a grand total of 21 miles and 4000 ft. el. It doesn’t seem like much, but I felt like I had been way out there on top of Sugarloaf Peak. And wondering what it’d be like to stay the night, or perhaps push on towards some of those mountains that I saw in the distance.

Perfect ending to a great day out with the bike is to be coasting down after having pushed all this up.

This entry was posted in fatbike, snowbike, Sugarloaf Peak. Bookmark the permalink.

1 Response to Sugarloaf Peak – with sunshine