The Kettle Crest trail is a national scenic trail near Republic, WA. The Pacific Northwest Trail includes this trail along its 1200 mile course. A couple years ago, Lee and myself rode a loop that included the northern half of the Kettle Crest trail. We had plans to ride the PNT for quite a bit more, but running short on food and energy we called it quits at Sherman Pass. A ride is a good ride when you start making plans for the next time already on the way home. And so it was: since then, the idea had been on my mind to try a race-pace through-ride of the Kettle Crest trail. In my case, race-pace with bikepacking gear would be similar in speed to a casual day-ride, but in spite of getting slowed down by camping gear, I really wanted to ride this as a self-supported loop starting in Republic.

Since the southern end of the Kettle Crest trail actually goes east to the middle of nowhere, I modified the route to go along the Barnaby Butte trail at the southern end to get me back to Republic. 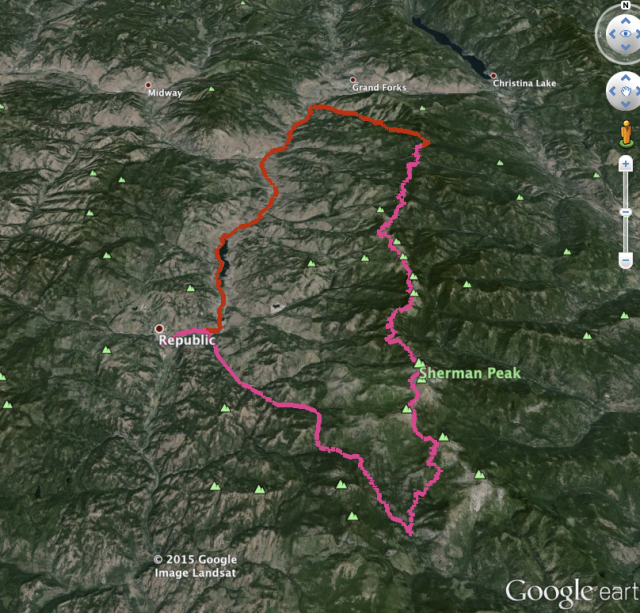 My ride started in Republic at the Golden Tiger Pathway, aka Ferry County Rail Trail. This recently connected rail trail goes past Curlew Lake, to Danville, which is very near the Canadian border. The trail is paved for a few miles near Republic before it turns to soft sand, followed by rail road rocks. 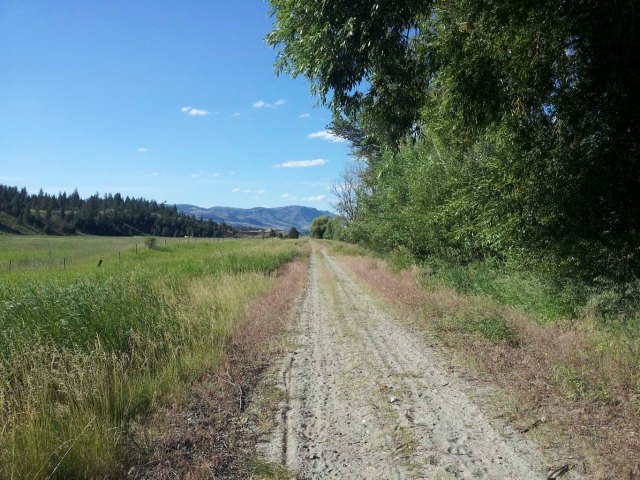 I did not really want to ride 25 miles of railroad ballast. Glancing at the map that I had picked up along the way from a information kiosk, I saw that in a couple of miles the trail surface would improve again. Near Curlew Lake the trail was sort-of-paved again and I could see the trestle bridge that had been reopened a few months ago. 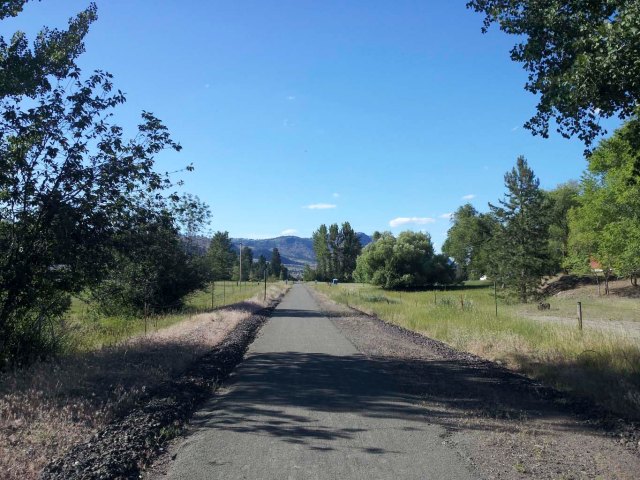 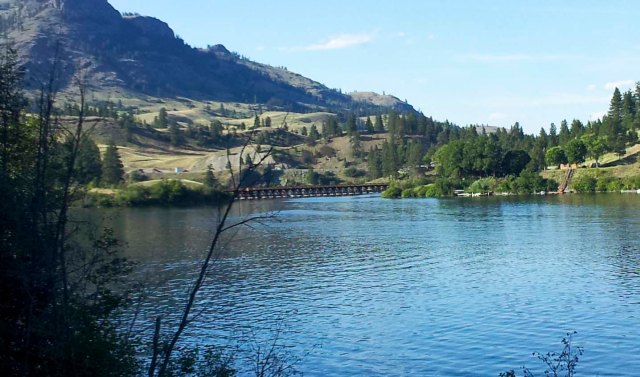 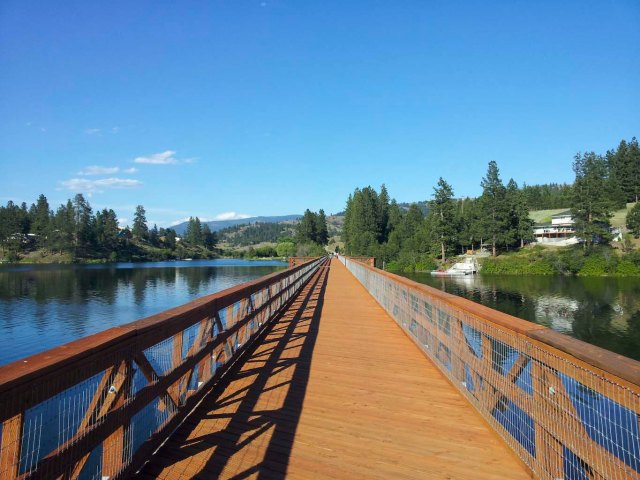 A couple people were fishing from the bridge. The trail surface then reverted back to railroad ballast, and since there’s a very quiet highway right next to it, I took the smooth and easy road to Curlew. There’s a small coffee+ snack place on the highway, called Tugboat, where I had ice cream and a lemonade, but downtown Curlew also has a couple old-time bars and a general store where one could stop in. 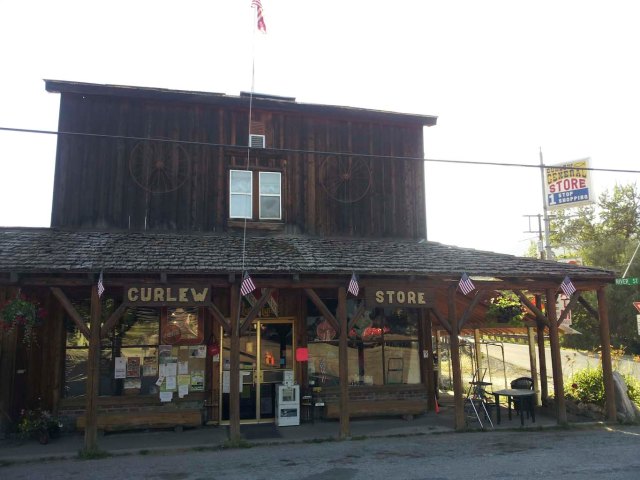 I followed the Ferry County rail trail a bit farther north before turning off to head up to the Kettle Crest. The trail north of Curlew was very nice, shady with reasonable trail surface. 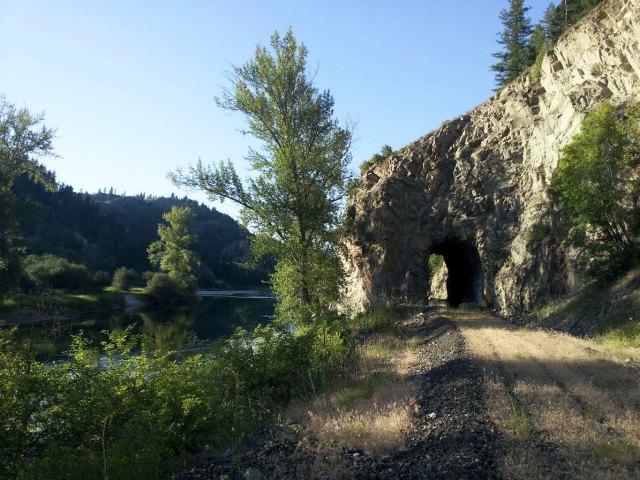 The ride up the Lone Ranch Creek Rd. turned out to take a lot longer than anticipated, as I kept loosing air in the front tire. After pumping a couple times, I finally stopped to investigated the situation by spraying water all over the rim. Air was leaking out from the underneath the valve stem! Since I also couldn’t hear any Stan’s sealant sloshing around in the tire, I added 1 oz of sealant, did the Stan’s shake, and pumped it up. No air leaking this time. Good. The next day, I would repeat this dance a few more times.

My plan had been to camp near the northern Kettle Crest trailhead at Boulder Creek Rd. As I was riding through the dark forest, the trail turned uphill again and was very wet. I finally found an actual spring right by the trail and filled up my water bladder. By this time it was 11 pm and I was tired. I had brought only the tent body without stakes or rainfly, and used it as a bug bivy by tying off the top corner to a tree branch. It worked great. The night was warm and quiet, and I slept pretty well considering that I am usually on the listening to the random little noises in the forest, in case there are wild animals coming for their dinner. As per usual, nothing bothered me. I set my alarm for 4 am and fell asleep.

The birds announced that it was time to get up before my alarm went off. Since I was awake, I ate a little, and once my alarm did go off at 4 am, it only took 20 minutes until I was pushing my bike again. That was unbelievably fast for me; usually it takes me about an hour to get ready, maybe 1.5 hours if I am particularly dazed.

My dwindled-down bikepacking setup, with enough food for another 24 hours.

My goal today was to ride pretty much all of the Kettle Crest as fast as I could. The last time I had been here with Lee, and I remembered many times along the trail where we stopped for lunch, took pictures, or had naps.

This time I was on a mission, and though I would have liked to stop and rest along the way a bit more, the bugs were really bad and left me no choice but to keep going. At first, there were just plain ‘ol flies, but later horseflies, 1/2 size horseflies and deerflies joined the attack. Towards evening when I was past Barnaby Butte, all the flies went away and mosquitos took their place in unprecedented numbers. Luckily, I had mosquito spray with me.

I filled up quickly with water near Long Allec Creek. Mostly, I pushed up the hills to keep my exertion level very sustainable. After about 5 miles, I crossed the first tree down across the trail, after which it quickly became apparent that this winter’s downfall had not been cleared past this point. Many, many trees were down, but most were pretty easy to go over/around/under. A few required puzzle-solving skills. Many sections seemed to go by much quicker than I had remembered them, and after a while I realized, that I was going twice as fast as I had been traveling with Lee a couple years ago.

Copper Butte would be the big push for the day and I was ready for it – or so I thought :o/. There were quite a number of trees down and this is where I sliced my leg a bit. Oddly, it didn’t hurt. 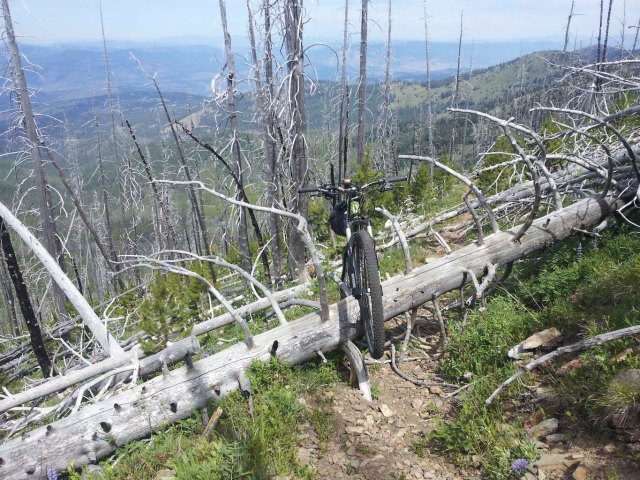 Pushing up Copper Butte and crossing tree number 73, or was it 140?

Going down the southern side, there were markedly less horseflies than on the northern side, so I took a break and downed a big serving of oatmeal. By the time I was done 10 minutes later, the flies had started to find me and I was glad to be on my way again.

The trail is really nice. Yes, there are long pushes, but also long downhills and overall it would be mostly rideable without bikepacking gear. I liked the HAB as it gave me a chance to use other muscle groups and stretch.

Sherman Peak is next!

Past Sherman Pass at Highway 20, the trail’s character changes at it becomes quite a bit rockier and less shaded.

Sherman Peak behind me.

This new-to-me portion south of Sherman Pass, was pretty fun for about 5 miles until reaching the Snowpeak Cabin. I chatted with three guys who had reserved the cabin for the night.

The spring near Snowpeak cabin was not flowing.

The Kettle Crest trail, meanwhile, is well traveled and goes down steeply. After reaching a saddle, one climbs steeply back up on the other side towards Barnaby Butte. The trail layout is really bad on both sides. Instead of following the Kettle Crest trail to its southern terminus over Barnaby Butte, I followed the Barnaby Butte trail going down SSW, loosing 2500 ft. over 7 miles along abandoned logging roads. This portion of my route was the biggest disappointment of the entire ride, and put me in a contemplative mood about what I am doing out there riding on-and-on, when I could be in places that are actually fun, or even at home. To me, abandoned logging roads are as much fun as busy highways, but while the former gives me a creepy feeling, the latter just scare me. 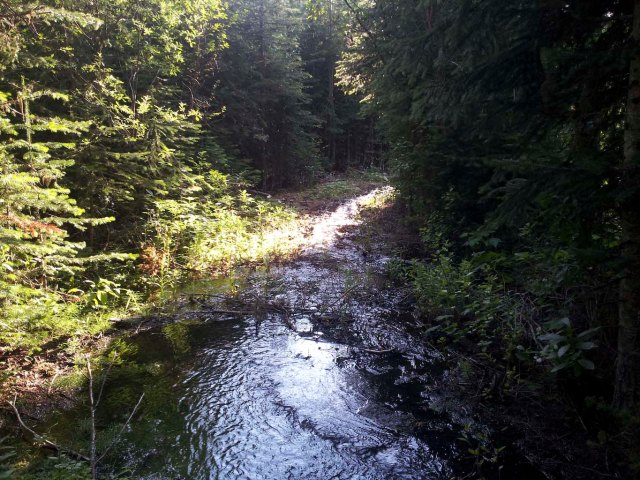 I was very glad to be done with the Barnaby Butte trail. It had taken me 15 hours to ride 45 miles and with 10,000 ft. of elevation gain. That was a personal best with bikepacking gear.  Mosquitos were starting to swarm me on the ride up a forest service road, but the mosquito repellent worked pretty well.

It was about 8 pm when I reached the trailhead for the Thirteen Mile trail. My legs were feeling fine, oddly, and the trail looked generally ok from the trailhead. But it would also be completely in tree-cover and probably offer no redeeming views, while adding 3000 ft. of climbing, or ~5 hours of riding. The 13-mile trail had been on my list of things to ride that day, but I couldn’t figure out why I would want to ride this trail now – and so I didn’t.  My mind was decidedly done riding for riding’s sake alone after the creepy Barnaby Butte trail, and so I took the roads back to Republic. Once I was riding on the dirt road, I was smiling to myself and knew that I had made the right decision.

What’s the upshot of all this? I learned that going as fast as I can decreases how much time I spend taking in my surroundings. Which might be ok when it’s really boring and buggy, but mostly I like to go out to explore new places.  Maybe I needed this long, fast, ride to prove to myself that I could do 10k elevation with bikepacking gear in a day, but I don’t feel like I gained anything of value in the process.

If someone is thinking of riding the PNT along the southern portion of the Kettle Crest, I would recommend heading down at Snow Peak trail. That extra detour was not worth the effort required.