Not through, but along the North Rim of the Grand Canyon, that is. While the lodge and housing on the north rim feel like a tourist ant-colony, the surrounding roads are not used much and offer a great way to get some solid miles (and views) in.

So, on a Sunday morning I set out to find my bikepacking friends who were on their tour of the Kaibab210 route. Not sure which way they were riding the loop from Jacob Lake, I figured that I would be riding it clockwise to get the most single track miles while I were still fresh. To intercept them, I headed north from the lodge. My route started/ended at the lodge, but without a GPS to record my route, I stitched it together by hand from the Kaibab210 route: 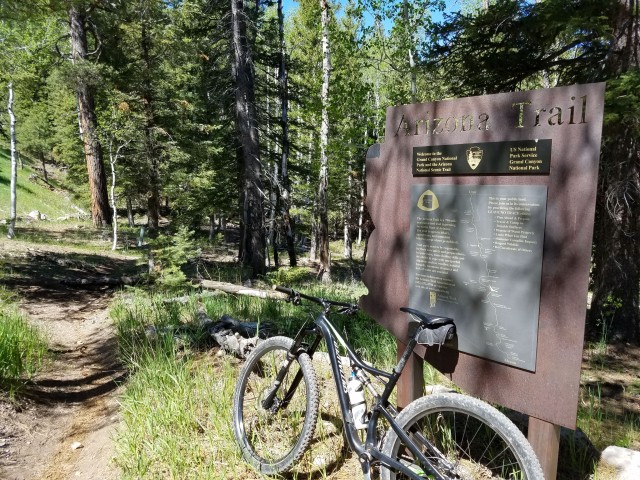 The rented Specialized Camber rode well, even if the size M was on the small size. The AZT from the North Rim isn’t especially terrific: it’s in the trees, not that well maintained and goes uphill a lot. After a while, I got on the dirt road right next to it; all was well again. However, there was no sign of the bikepackers I was trying to meet. If they were riding the loop in 3 days, they’d better be through here by now! Figuring that they must be riding the other way, I turned around and hoped that I’d catch them somewhere on the Rainbow Rim trail.

Going the other direction  quickly lead to a dirt road which was much more scenic. There were steep, loose and rocky parts, sometimes all at once. The full suspension bike made climbing and descending a much more stable experience than my usual hardtail bike would have.

After a while, the first viewpoint was reached near where Jörn and I had taken pictures not 18 years before. How time flies.

After talking with a Jeep’er, it didn’t seem likely that the crew had reached Point Sublime, yet. And, with only 1 mile left to go and no tire tracks in sight, I turned around hoping to catch them near the Rainbow Rim trail, instead.

A short while after I turned around, a text message came in that said that they were near the North Rim lodge and going to take a rest. I estimated that I could knock out the roughly 15 miles in 2 hours, and at least say ‘Hello’.  And I did!

It was nice to catch up for a few hours with Pascal, Lee, Scott and Ez, and meet new bikepackers Kurt and Caitlin. Good company until the late hours of the evening.

The next morning, we went on a short hike at Imperial Point – well worth it! 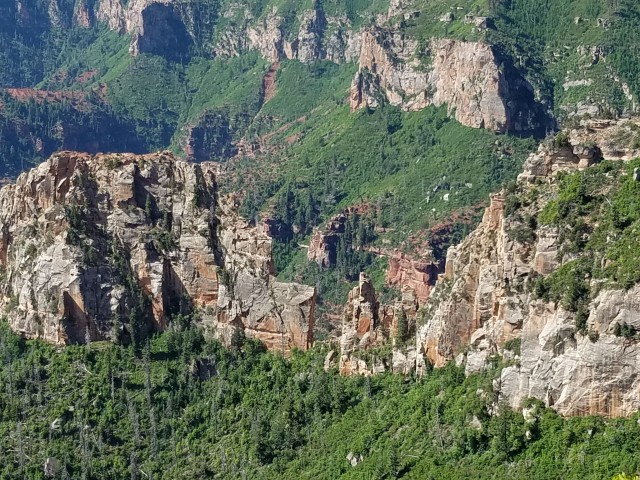