Or should that be Mt. Müller? I probably won’t ever know.

After mapping this route last month and deciding that it was too big to ride in 1 day, I took another look on RideWithGPS, and voilá, there the elevation gain was only ~10k ft. To save batteries and since I knew most of the way, I turned on the GPS for the Mt. Muller section only. This turned out to be a mistake as re-creating the route afterwards on RideWithGPS was impossible due to routing errors. But, I did piece it together manually eventually:

The weather forecast for Monday showed some smoky haze rolling into the Olympic Peninsula, but I assumed that it would still be better than anywhere else in Washington State that day. So, at the crack of 4:10 am on Labor Day, I drove to the Edmonds ferry. Turns out that the ferry doesn’t board until 5:30 am, and since there was no traffic jam along the way, it was a bit of a wait before breakfast could be bought & consumed. Still much better hanging out on the ferry, than driving down through Olympia, even if it takes just as long.

After a stop for coffee at McDonalds in Port Angeles, the bike was readied. The new 3.5″-wide front wheel and 27.5+ fork added 1 kg. Now that’s what I call a serious upgrade – and I hoped that it would be worth it pushing that extra weight around. 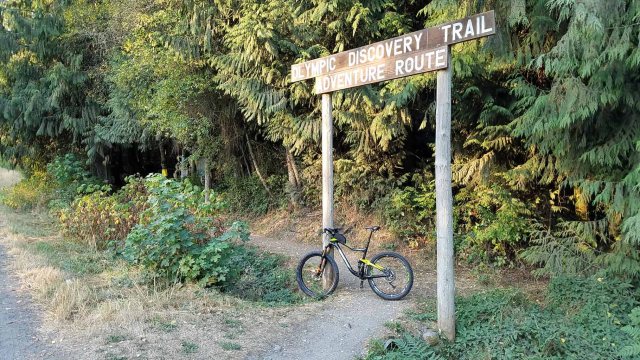 With only 3 liters of water on my back, I’d be on the lookout for water along the way.

The ODT just felt too easy, how can it be downhill all the time? Well, almost all the time. I stopped at the obvious places for quick photo-ops, and chatted with a couple guys, Nick and Mike, who were out riding. Nick gave me suggestions on shortcuts when he heard of my plan, and Mike knew a lot about the trails in the area as he had done a lot of trail work here and other places working for the NF and NP.

Still no smoke! Lucking out. 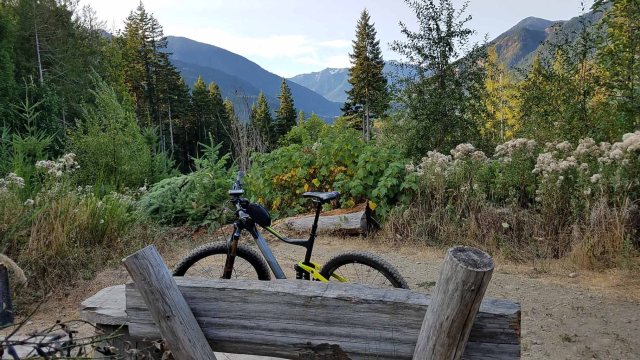 Canada in the distance.

Down the swoopy serpentines.

Lunch was had one of the nicest picknic places I know. The baby food was delicious!

Onwards to Lake Crescent, I was looking forward to the sweet single track along the lake shore. But first, we go up the gravel road. Guess who was coming down? 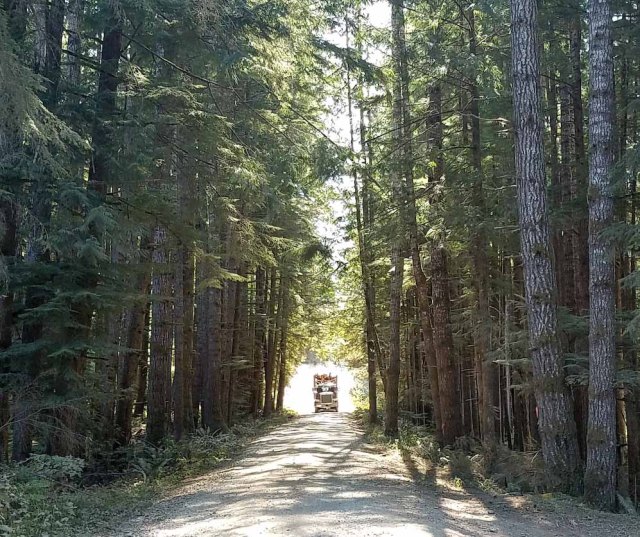 As menacing as the rig looked, the guy drove super slowly. Thank you!

But, when I came to Lake Crescent, the single track was gone. No way! A huge pile of gravel had been poured right over it. What a shame. What used to be people and kids meandering of roots and rocks, is now a 30 ft. wide gravel road filled randomly with people, some of whom manage to take up the whole road. Boo!

Just before the tunnel, the old singletrack reappears. Yay! After letting a couple small kids pass, riding the techy trail was just as cool as I remembered it. Just too short, now.

Lots of people hanging out at the swimming hole, then back on the trail, which hasn’t been destroyed by gravel, yet. I think it’s coming, though? Too bad if they do it.

Such a cool trail.

Much to my dismay, the ODT is then actually paved. For whom? Why? There’s a road just below the trail!

The whole time riding along this trail, it seemed very dry, and I was getting worried about finding water. Alas, a tasty creek was found around milepost 33, 34. 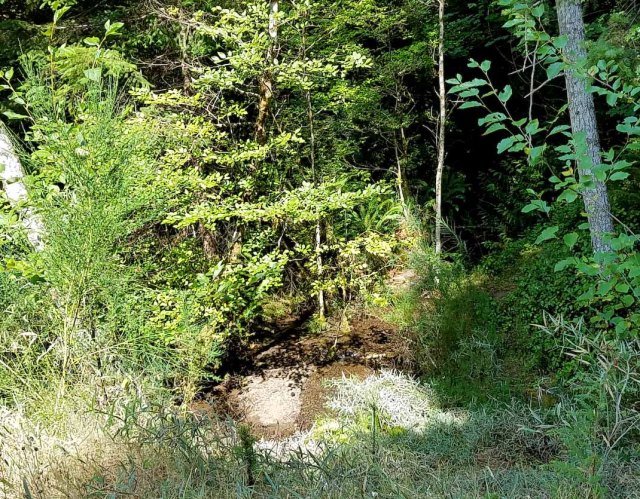 I did get a glimpse of my next goal, which I had to admit to myself, looked a bit daunting. But, a plan is a plan, so keep riding.

The lower (southern) portion of the Mt. Muller loop is very gently-rolling single-track and well maintained. Good even for kids. Or someone hunting mushrooms.

After a quick stop at the trailhead, it seemed to be really getting hot. There was one car left in the lot when I started, but I didn’t see anyone on the loop. It might have been the mushroom hunter on the lower trail?

The first 1 mile is ~18% grade, which in the heat meant a lot of pushing and resting. Afterwards, it leveled out to only 15%, which was occasionally rideable by my tired and heat-exhausted legs. There’s a tiny spring half-ways up by “Oasis Creek”, where I refilled a bit of water.

When I finally reached Snider Ridge at Jim’s Junction, I thought that I was done.

But, as all ridgeline trails do, this one also followed the ridge up and down. You’re never at the top.

The forest up here was dark, with very soft ground in places. Various kinds of fir trees, apparently. There was a huge dark smoke cloud above me blocking the sunshine and it started to get a bit chilly and ominous. 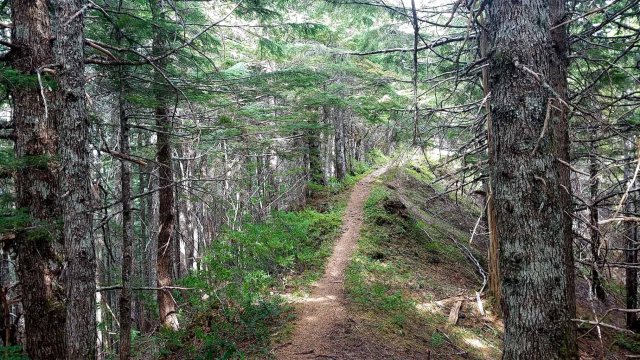 Occasionally, the trail pops out onto an alpine meadow. Very unique.  Mt. Olympus in the distance – still visible even with the heavy smoke in the air.

Finally, the forested top of Mt. Muller was reached.

If it looks like the rear wheel is a little outgunned by the front tire – I can attest that that was indeed the case. The front tire would gobble up rocks without slowing down, while the slightly smaller rear tire would get hung up and start to chatter. Poor little guy. I was surprised to notice the difference in roll-over that a 1.5″ larger wheel makes! The downhill was the place where all this extra weight finally made sense.

Smoky view from the top.

But, before there’s downhill, there were even more short uphill pushes. Lake Crescent could be seen, if only barely.

Back down on the paved ODT, I helped an older couple on bikes find their way back to 101. After filling up with water at the creek again, it was fast downhill spin to the bridge and swimming hole. So pretty. Please don’t pave!

It was starting to get a bit later than I had hoped, so I skipped the gravel section where I had met the logging-truck on the way in, and instead took a bit of pavement to get back quicker to the Adventure ODT. Some calories were consumed at one of the nice picnic benches.

Riding the ODT back it didn’t seem “almost all downhill” anymore, even though it’s 3500 ft climbing either way. This time it seemed more like climbing 3500 ft. Coffee was consumed yet again in an effort to keep my stomach from seizing up.

About 5 miles from the end, the front tire finally broke loose in one random corner, which definitely didn’t look like anything to worry about. Not sure what happened there. But, the tire found grip again and life was good. At the next corner, I actually paid attention to steering, and it hooked right up. So much for getting tired. 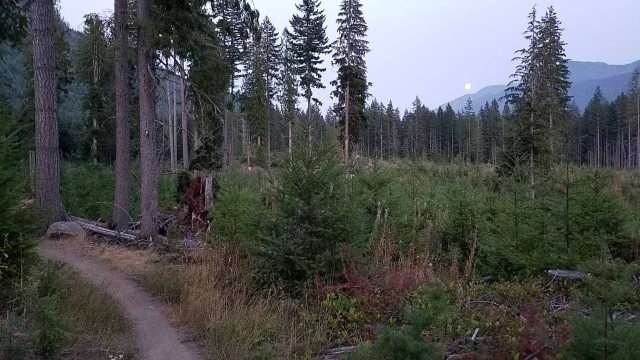 It was getting late, the Moon rose, and with only 2 miles to go, I was getting jittery and had to take an extended cookie break. Water, Oreo — repeat.  A revival feast. No need to literally crash so close to the end.

As I arrive back at the car after dark, I was thinking that I might do this ride again next year if all goes well. It’s actually worth the 6 hour drive/ferry-ride.